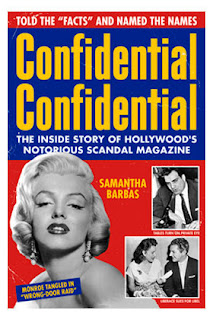 Confidential Confidential presents a thoroughly researched history of America's first celebrity gossip magazine and the legal disputes that led to its demise.

With an extensive network of informants, Confidential Magazine soiled celebrities' pristine reputations by publishing the stars' scandalous secrets including extramarital affairs, drug use and taboo sexual practices in lewd detail. By 1955, Confidential was the bestselling publication on American newsstands, forcing many to question the scope of freedom of the press and society's moral obligation to censor indecent content. Ultimately, a slew of libel and obscenity lawsuits against the magazine - concluding in an infamous 1957, star-studded Los Angeles trial – led to Confidential's downfall.

Confidential Confidential provides readers an insider's view on how the magazine obtained its juicy stories and established the foundation for such future gossip publications as People, the National Enquirer and TMZ. Confidential's legacy endures in our ongoing obsession with sensationalism, gossip, and celebrity scandal.