Coel Kirkby, University of Sydney Law School, has posted Law Evolves: The Uses of Primitive Law in Anglo-American Concepts of Modern Law, 1861-1961, which is forthcoming in the American Journal of Legal History: 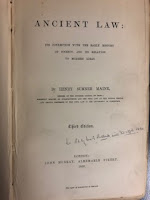 This study traces how Anglo-American legal thinkers used primitive law to develop their concepts of modern law in the century from Austin to Hart. It first examines how Maine developed his historical jurisprudence as a form of social evolutionary analysis of law. Next, it traces the development of legal anthropology as a distinct discipline combining the scientific method of participant observation with the legal method of the case study. Finally, it looks at how Hart uses primitive law to make his famous argument that law was ‘the union of primary and secondary rules’. In each case, legal thinkers develop their concepts of modern law through a foundational contrast with primitive law. This is a striking feature of much Anglo-American jurisprudence that cuts across the borders of the positivist, natural, historical, realist, and other schools of jurisprudence. Appreciating these new uses of primitive law is a first step in excavating an intellectual history of legal thought grounded in the context of colonial knowledge.