Twining in Conversation with Sugarman

David Sugarman’s series of intellectual biographies of and conversations with leading figures in a generation of British legal academics who have made significant contributions to legal history and biography continues with Jurist in Context: William Twining in Conversation with David Sugarman, published (open access) in the Journal of Law and Society 47 (June 2020): 195-220: 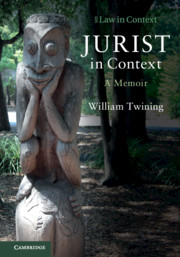 William Twining is one of the most influential figures in academic law and legal education. His trailblazing contribution to the broadening of legal education and scholarship has been pivotal. He is an activist reformer and an international leader in fields as diverse as jurisprudence, evidence, globalization, and legal education. This discussion arises out of lengthy recorded conversations in which William talks about his latest book, Jurist in Context: A Memoir (JIC). It recounts the development of his thoughts and writings in the context of Africa, the United Kingdom, and the United States, addressing topics that have been central to his life and research. In this dialogue, we aim to convey the flavour of William's latest thinking, and to extend its arguments.  The discussion illuminates a range of issues including the significance of Africa, colonialism, and decolonization; how William felt betrayed by Salmond on the Law of Torts; how his periods in Africa, Belfast during the Troubles, Warwick, and the United States shaped his thinking; and his conception of Law as an academic discipline and the role of theorizing within it, responding to those who regard his own approach as insufficiently critical or simply 'liberal'. It also delineates some of the most important thinkers who have influenced him; his analysis of the concept of 'law in context'; his thoughts on the interplay between socio-legal work and empiricism, American Legal Realism, and 'realism'; his reassessment of his own work, including his mea culpas and changes of mind; his latest thoughts on legal education; and the added value that a globalization and law perspective and the work of non-Western jurists bring to the discipline of Law and to Jurisprudence.  Here, William adds a more personal reflection to his formal publications. The conversation also offers a fascinating window on the development of, and the struggles surrounding, legal education and academic legal thought over the second half of the twentieth century and the early part of the twenty-first.