Exploring Law in the Russian Empire: Spatial and Temporal Choices 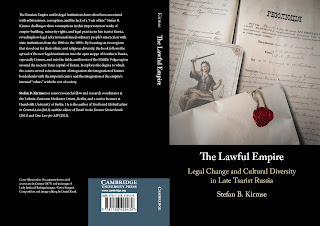 Today’s blog entry is about choices. How do you choose the period you focus on in your historical research, and which regions – in an empire as vast and diverse as the Russian one – do you select as case studies? More than that: What exactly is the case study? Is it the region itself, a particular group of the population in that region, or specific experiences made and shared by this population? In what follows, I would like to show why these questions are important and how they have affected my work over the years.

My research on law and legal practice in the Russian Empire has focused on courts in Crimea and the Middle Volga region around Kazan from the mid-1860s to the mid-1890s (for my recent monograph, look here). The two regions stood out for their cultural diversity and were home to sizable populations of Muslim Tatars. There are both practical and historiographical reasons for this spatial and temporal focus, which I explain below. I will also address the question to which degree my study can be considered a comparison of two regions. But let me start with the temporal focus.

Examining the "reform period", at a price

Despite my frequent reference to “late tsarist Russia,” my work’s center of gravity is the 30 years after the Great Reforms of the 1860s. Much has been written about the turmoil leading up to, and beyond, the 1905 and 1917 revolutions while far less attention has been given to more stable political periods. The three decades after the Great Reforms were one such period, even if they were not immune to terrorist activity, the frantic search for real and imagined revolutionaries, and occasional revolts. Outside the metropolitan centers and some border regions, the population was far less involved in political turmoil than before or after these years. Academic writing has tended to explain the revolutionary fervor in early twentieth-century Russia as the result of smoldering discontent; yet the evidence for such a causal link is scanty. It seems to me that revolution is certainly thinkable as something that skillful actors brought about in parts of the empire after 1900 despite the relative stability of the previous decades. Surely, there was discontent, but as many cases in modern history show, discontent does not mean revolution. In short, it makes sense to study the three decades in question in their own right, and not as a prelude to twentieth-century upheaval.

However, the reason for largely ignoring the twentieth century in my research is not purely historiographical. It is also rooted in the availability and nature of sources. Let me stress two key points. First, the last twelve years of imperial rule (1905-1917) were highly specific, and this specificity had an impact on courts, as evidenced, for example, by crime statistics: between 1880 and 1905, the number of ordinary criminal cases processed per year was around 3,000 in Crimea and around 4,000 in Kazan before they took a plunge after the 1905 revolution. With changed jurisdictions and court procedures, they soon stood at a mere 500 annual cases in Crimea and 800-900 in Kazan. At the same time, the courts became more and more concerned with state security. In Kazan, political ‘crimes’ suddenly began to make up 40% of the caseload. During the last twelve years of empire, in other words, the judiciary was no longer the same system the Great Reforms had introduced.

Second, the Kazan and Simferopol archives reflect the 1905-1917 period in a specific way: records hardly contain any ordinary cases, despite the fact that hundreds of such cases were still processed every year. The reason for their disappearance was probably rather mundane. Since most of these files were re-organized by archivists during the Stalinist period, it is not unlikely that decisions were taken at this time to preserve political files (to highlight the police-state character of the hated tsarist administration) and to remove non-political files from the shelves. In the decades that followed, this trend persisted: records in Crimea and Kazan confirm that non-political cases were destroyed in large numbers in the 1980s. As a result, for the early twentieth century, there is now but a handful of ordinary cases to explore, which makes a qualitative analysis of circuit court activity during this period virtually impossible.

Either way, the decision to exclude the early twentieth century, by and large, from my analysis came at a price. Since the 1905 revolution resulted in freedom of the press and the freedom of conscience, it also led to the emergence of a Tatar-language press. Prior to this, Tatar opinions could, for the most part, not be expressed in writing on matters other than Islam. Therefore, the courts introduced in the 1860s, which were seen as a secular matter regardless of the continued role of religion in civil law, were not and could not be debated in Tatar publications, even if they affected millions of Tatars. They only became a matter of Tatar debate after 1905, and soon they were indeed discussed in great detail in a range of new Tatar-language journals. But since these journals were a post-1905 rather than a reform-period phenomenon, I felt it would be inappropriate to include them in the “The Lawful Empire”. I will address this issue of language and voice, and related future plans, in more detail next week.

Why Crimea and Kazan?

My regional choices were in some ways easier, but also raise questions. The point was to choose (at least) two ethnically and religiously diverse regions of the empire and explore the fate of the reformed courts. Classic borderlands such as Central Asia or Poland and the Baltic states were out of the question because the new courts arrived there much later, and only in amended form. Kazan, the ancient capital of Muslim Tatars on the Volga River, and the southern peninsula with its strong population of Crimean Tatars lent themselves to this enquiry for a number of reasons: first, in both regions, the non-Russian population was not only very sizeable at over 30% but also predominantly made up of Muslims (which fit my long-standing research interest in Eurasian Muslims); second, both were “intermediate terrains”, different from the imperial heartlands as well as more remote borderland regions; third, both were endowed with the new legal order at roughly the same time (1869 and 1870); and finally, at a more practical level, both had very accessible regional archives that held a wealth of useful documents. It was a lucky coincidence that my fourth and final extended stay at the Crimean archive ended in November 2013, just before political developments spun out of control there. I have not returned to Crimea since then and while I know that other researchers have, the political circumstances raise too many ethical questions for me. I have therefore begun to focus on other locations and archives in the Black Sea region. But that is a different matter...

Can my work as exemplified in “The Lawful Empire” be considered comparative then? I think the answer is yes and no. Yegor Lazarev, in his insightful comments on the book at the last LSA annual meeting, rightly pointed out that the Crimean case is given a little less attention. This is undoubtedly true. I could give an easy answer and say that two of the issues that are discussed at quite some length in the book – the emerging public sphere and law department at Kazan University, and the Tatar riots of 1878 in Kazan province – simply had no equivalent in Crimea. But this is only half the truth. One could have compensated for this by giving more attention to a crucial Crimean issue, namely emigration, forced exile, and return migration, which kept the imperial courts busy for quite some time. I chose not to do this, not only because this exodus has been studied for years, but also because the book was never designed as a systematic comparison.

When I submitted an earlier version of the manuscript to Humboldt University for my habilitation (German professorial exam), I was encouraged by the reviewers to make the comparison more explicit, and I subsequently heeded this advice. “The Lawful Empire” does engage in quite a bit of comparative analysis; for example, in its discussion of changing images and ideas of Crimea and Kazan, the local implementation and reception of legal reform, mechanisms for accommodating diversity, and land disputes in the two regions. Similarities and differences emerge in almost every chapter. Yet, I would still argue that it is, in many ways, one rather than two case studies and that the slight imbalance may thus be forgiven. It is less a book about two regions or specific populations; rather, it is about the gradual spread of the reformed courts into “intermediate terrains” and about the new equalities and inequalities this expansion created. In a way, one could have focused on either Crimea or Kazan and still retained much of the argument; and yet, I believe that the discussion of material from both regions, along with the implicit and explicit comparison, adds rewarding layers of depth and nuance.

Ultimately though, this research should be placed beside related studies in the rapidly growing field of law and legal practice in tsarist Russia, a comparison that will bring to light striking differences. The relatively inclusive approach pursued by the courts in Crimea and Kazan provides a contrast to continued segregation along much of the empire’s Western border, most of Siberia and Central Asia. Muslims were not all treated the same: in the empire’s deeply territorialized form of rule, their status and life options depended greatly on where they lived, and some became more integrated than others.

Posted by Stefan Kirmse at 3:21 PM