Out this month by Justice John Sackar (Supreme Court of New South Wales) is Lord Devlin with Hart Publishing. From the press: 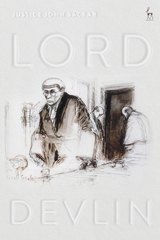 Lord Devlin was a leading lawyer of his generation. Moreover, he was one of the most recognised figures in the judiciary, thanks to his role in the John Bodkin Adams trial and the Nyasaland Commission of Inquiry. It is hard then to believe that he retired as a Law Lord at a mere 58 years of age. This important book looks at the life, influences and impact of this most important judicial figure. Starting with his earliest days as a school boy before moving on to his later years, the author draws a compelling picture of a complex, brilliant man who would shape not just the law but society more generally in post-war Britain.