My research on the Russian Empire’s courts in the second half of the nineteenth century raises the crucial issue of language, both as a subject of research and as a methodological challenge.

As I discuss in “The Lawful Empire”, the court system introduced by the Judicial Reform of 1864 developed and spread according to a spatial logic, expanding gradually from St Petersburg and Moscow to other provinces in European Russia, and eventually into more distant borderlands (for details, see here). In so doing, the new courts did not do away with legal pluralism, which allowed for and even encouraged indigenous legal forums in some regions and areas of (mainly civil) law that made ample use of languages other than Russian. Yet, the geographical expansion of the imperial courts still furthered legal unification to a significant degree, and their establishment in culturally diverse regions brought large numbers of non-Russians under their jurisdiction.

Language in the courtroom

Formally, Russian was the only language allowed in the reformed courts; all officials had to speak it, and only people who understood sufficient Russian to follow the cases could be called up for service on the newly introduced juries. This monolingualism, however, soon met with the linguistic reality of the empire, in which non-Russians constituted a majority, namely 57 percent of the population, by the late nineteenth century. The situation, described by some jurists later as an issue the reformers had simply not thought about, required practical solutions. For cases in which the litigants or accused did not understand Russian, the law prescribed the use of interpreters. This arrangement worked in some cases, yet in regions as diverse as Crimea the court neither had the financial nor the human resources to meet the demand for constant interpretation. Either way, intermediaries were no solution for regions such as Bessarabia, the Baltic Sea provinces and especially Poland, where not only the litigants and witnesses but also the judges and lawyers tended to be native speakers of Polish, German, and Romanian (not least because few Russian jurists wanted to serve there). In practice, therefore, local languages were constantly used in state courts because the system would not have worked otherwise. It was a glitch the reformers had not foreseen.

Only in the Baltic provinces was linguistic diversity ever formally recognized. In May 1880, German, Estonian, and Latvian were admitted for both written and spoken court procedure. As before, though, there was a hierarchy of languages: in appeals sent to St. Petersburg, the key summaries had to be provided in Russian; accompanying materials (interrogation records etc.) were admissible in German, the language of the Baltic elites, but not Estonian or Latvian (which were considered less “cultured”), and had to be supplied with a Russian translation.

Most of the court activity examined in my research is from the two regions of Kazan/Middle Volga and Crimea, both of which had large populations of Muslim Tatars. That raises the question of the use of Tatar – a Turkic language then written in Arabic letters – in the reformed courts. Did the Tatar language feature at all in these courts? By the mid-nineteenth century, this language had long played a key role for the imperial state, not least in communicating with its Muslim population, and Tatars fulfilled important functions in the local administration, economic elite, and judiciary. Many new laws were quickly translated into Tatar (and circulated between Kazan and Crimea), to make sure that their implications were fully understood. That said, just as elsewhere in the empire, in Tatar regions the reformed courts were designed as monolingual, Russian-speaking institutions. In some districts of Kazan province, Tatars consistently made up more than 50 percent of the jurors. A small number of Tatars served as lawyers and surrogate judges, but far more importantly, they appeared as litigants, injured parties, and witnesses. In many of the cases I studied, Tatar was used in the courtroom by people who did not speak Russian, or spoke it poorly, but the statements were immediately translated by interpreters and never recorded in the original (the minutes of trials and interrogation records usually say things like “X answered in Tatar that…”). Tatar, along with other local languages such as Chuvash or Mordvin, could be used when native speakers had to swear an oath, and Tatars in court usually signed their names in the Arabic script; but unlike in the Baltic provinces, cases could not be brought to the courts’ attention in local languages, and the only accompanying documents admissible in Tatar were deeds of purchase signed under Tatar rule (which de facto limited these documents to Crimea, where the Crimean khanate had only fallen in 1783). I did not see a single Tatar-language document in all the cases I came across in Kazan, not even Tatar-language originals with Russian translations. What was noticeable, however, was that some of the Russian-language documents addressed to the court were full of grammar mistakes and clearly not written by native speakers. Tatar was thus, at best, an informal language in the new courts. Surely it was used among jurors and litigants, by heckling members of the audience (as many trials were public events), or by Tatar officials to give quick, off-the-record explanations, but it was not formally admissible in court.

While court documents are full of (usually translated) Tatar voices, contemporary publications from the 1860s to the 1890s, unfortunately, are not. As I explained in my previous blog entry, freedom of conscience and freedom of the press only came to Russia with the civil rights introduced by the 1905 revolution. Prior to this, with very few exceptions such as the Crimea-based newspaper Tercüman (ترجمان‎, “Translator”), which was simultaneously published in Tatar and Russian, Tatars could only publish on matters of Islamic thought and religious practice. Famous Islamic scholars such as Şihabaddin Mərcani (1818-1889) in Kazan, who also held a range of religious functions, produced many texts on religious questions while also addressing broader matters such as education. He even participated in sessions of the new imperial courts, administering Muslim oaths. Yet, I have not come across any writings in which he discusses the reformed courts directly (if anyone has, please let me know!).

After 1905, Tatar-language publications mushroomed, especially in Kazan and Orenburg. Newspapers like Nur (نور, “Light”) and journals such as Shura (شورا) now examined a wide range of socio-economic, religious, and political problems, many of which touched upon legal questions. Satirical magazines like Yashin (ياشن, “Lightning”) did the same with a different tone. Most importantly perhaps, while the aforementioned journals were mainly used by Islamic scholars for expressing their opinions, the legal journal Hoquq va hayat (حقوق و حيت, “Law and life”, see below the cover of no. 5, May 31, 1913), published in Kazan from 1913 to 1914, became a vehicle for Tatar jurists trained at Kazan University to acquaint readers with the imperial court system more broadly. It went out of business after little more than a year, mainly for lack of subscribers. 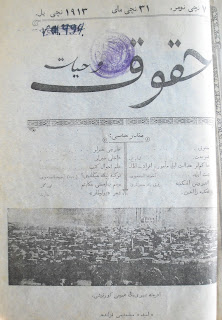 For a number of reasons that I discussed in a blog entry last week, my book ended around 1890. As a result, I did not include the rich Tatar press of the post-1905 period in the analysis (but may well do so in follow-up articles tracking developments into the early twentieth century). By this time, the courts were no longer the institutions introduced some forty years earlier. The focus of Russian-language articles on the judiciary was also very different from what it had been in the 1860s.

Scholars of intellectual history have an advantage when it comes to sources because intellectuals love telling the world what they make of it. But I found it necessary not to write another book on Russian or Tatar scholars (of which there are many), and to focus instead on the rural masses. This choice leads to a lack of (unmediated) Tatar voices, which is both unfortunate and, in my view, unavoidable for the case at hand. Yet, this is a problem that scholars of rural society have always faced. In both Crimea and Kazan, the overwhelming majority of Muslim Tatars were farmers or small-town craftspeople, traders, and day laborers, who did not to sit down and take notes on law and legal practice. They were also very diverse, of different age, gender, and sexuality. Some cared about religion, others did not. Vodka was an important part of daily life in both Russian and Tatar villages. Thus, the detailed court records and other forms of state documentation, despite all their biases and power asymmetries, perhaps give these people more of a voice than intellectuals ever could.

Posted by Stefan Kirmse at 2:03 PM