[We have the following announcement from our friends at the Max Planck Institute for European Legal History.  DRE] 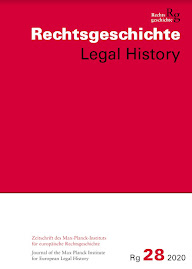 This year's edition of Rechtsgeschichte - Legal History. Journal of the Max Planck Institute for European Legal History was published recently in September and once again brings together outstanding research contributions on legal historical topics as well as a considerable number of reviews. Our sincere thanks go to the 57 authors who, despite the difficult conditions created by the Covid-19 pandemic, made it possible for us to deliver this year's issue on time.

Five research contributions on very different topics kick off the issue. Tamar Herzog explores the debates between Romanists and Germanists regarding the origins of European law, with a particular focus on Spanish legal historiography. Her study demonstrates what narratives of legal origins reveal about law as well as about national or European identities. Christoph Meyer's article is devoted to the epitomisation of Latin legal texts: a widespread technique that was significant not just in methodological and literary but also in normative-functional terms. Based on a plethora of primary sources and a detailed knowledge of the scholarly literature, Meyer offers a tour d'horizon of the often underrated method of epitomisation from late antiquity to the modern era. Thomas Pierson uses the substantial collection of so-called "service letters" (Dienstbriefe) of the city of Frankfurt am Main to trace the development of the contractual employment conditions of the city's employees from the late 14th to the early 19th century. His findings provide stimuli for both the legal and the social history of pre-industrial labor. Martin Schennach probes the little-known depths of Austrian constitutional law scholarship. Since the second half of the 18th century, the flourishing genre of Staatsrechtslehre developed that aimed at the construction of an "entire Austrian state" (österreichischer Gesamtstaat). Finally, Klaus Günther analyses the historical conditions, characteristics, and consequences of the democratic transformation of modern criminal law. This leads him to examine the basic values of social cohesion and the assumption of duties of care and respect (Fürsorge- und Respektpflichten) by the citizens of a state.

Seven focus articles then deal with the legal history of the financial markets, for the first time systematically examining the fundamental relationships between risk cultures, crisis experiences, and developmental dynamics of (the knowledge of) law. The editors of this section, Carsten Fischer and Andreas Thier, introduce the topic. Jan Schröder provides the foreword to the second focus section, which is dedicated to the memory of Knut Wolfgang Nörr, who died in 2018. Three contributions pay tribute to both the personality and the oeuvre of Nörr, who for many years maintained a close association with the MPIeR as an External Scientific Member.

More than three dozen reviews deal with publications of relevance to legal history and published within the last two years. As in previous issues of the Rg, many reviews are written in a language other than that of the publication itself. The reviewed works' contents range chronologically from antiquity to the present, and geographically from the coasts of Chile and the highlands of Mexico to northern European regions and on to Tanzania, Indochina and the empire of Genghis Khan.

Finally, the theme of the finance is also taken up by Juliane Voß-Wiegand, who provides an introduction to the numismatic collection of the Deutsche Bundesbank. She is not only the author of this issue's marginalia on the historical monetary symbols preserved there, but also curated the impressive series of images that illustrates this year's print edition of the Rg.

Rechtsgeschichte - Legal History 28 is as always available in print from the publisher Vittorio Klostermann and online in Open Access via the journal's website.