„By order of the Highest Manifesto, promulgated on May 15, the case against the former Kazan governor Skariatin, processed by the Criminal Cassation Department of the Governing Senate, has been closed and will not be heard.“

At first sight, this sober piece of news may not strike you as very important or exciting. But when I first came across these lines in the reading room of the Russian Academy of Sciences, I was moved and relieved. It must have been May 2012. It was an odd and rather special moment during the research that went into my book The Lawful Empire (Cambridge 2019). Let me explain why.

The short note published somewhere towards the end of the Novoe Vremia (New Time) newspaper on July 13, 1883, was not an eye-catcher. I had almost moved on to the next page, and I had to read it several times before I believed it. I had spent the last few weeks going through every available newspaper published in St. Petersburg in the first half of 1883. What on earth had happened to governor Skariatin? Between 1879 and early 1883, the fate of this governor – revered by some, despised by others – had kept large parts of the Russian press occupied. But something must have happened in 1883 that made his name disappear from the headlines. It was almost like he had vanished into thin air.

Nikolai Iakovlevich Skariatin was the protagonist and anti-hero of my book’s final chapter. Thoroughly unlikeable in many respects (not least because of his racism, penchant for violence, and disrespect for the law), in a bizarre way, he had also grown on me. Perhaps it was the fact that I had spent so much time piecing together the trajectory and impact of this man, whose life had gone almost completely unnoticed by biographers and historians. As the governor of Kazan Province from 1866 to 1880, he was the kind of mid-level imperial administrator who did not leave many traces. Back in November 2011, I had given a talk in DC (and shortly afterwards, another one in Berlin) on Skariatin’s inglorious role in the Tatar riots of 1878, and while I had been able to show how this over-ambitious governor had been sacked and put on trial for using excessive violence when putting down an uprising, I had not been able to answer questions on what happened to him in the end. It was vexing.

In many historical studies, we are now concerned with offering new perspectives on established material. We develop "mental maps" or use transregional or global history approaches, and we follow the spatial, performative, or emotional turns (among a dizzying array of other turns) to gain new insights from our material. And there’s nothing wrong with this. Most of the time, though, we already know what happened. It’s more a question of new interpretations and challenging, or deconstructing, old narratives. In legal history, though, the situation is different. Once you move beyond key historical cases that caused public outcry or major legal and political debate, you often enter the unknown. Dozens of legal cases in my research on Russian imperial history had not been addressed by other researchers (also evidenced by the archival registers in Crimea and Kazan, which showed that many files I ordered were completely untouched). It would then take me weeks or even months to gather all the details (as the handwritten files for ordinary criminal and civil cases could be hundreds of pages long). I remember moments at the Kazan archive when I suddenly felt like Tom Hanks in the Da Vinci Code, as yet another detail had just emerged from a new file and given things a completely new twist. Historical research can be surprisingly suspenseful. It certainly was in the Skariatin case.

The case of the governor was also a prime example of a journey into the unknown. Admittedly, bits and pieces of the story had been told before. A highly authoritarian governor had subjected several Muslim Tatar villages to severe corporal punishment in reaction to their alleged rebellion; in what almost sounded like a caricature of a Russian conservative, different sources confirmed that he had moved through rows of Tatars, tied down and birched by his soldiers, and with every lash he reportedly shouted things like “This is for Muhammad!” and “This is for the Qur’an!” To make matters worse, some of the victims were even taken to court for resisting the authorities. What had received far less, if any, attention in the literature was the second part of the story: that about two years after the incident, complaints about Skariatin’s cruelty had reached the highest level of the empire’s judiciary, which proceeded to dismiss the governor and press criminal charges against him. In a protracted, two-year judicial process he was eventually put under house arrest and scheduled to be tried by a jury. By this time, a virtual war was raging in the Russian press on Skariatin's alleged guilt, on the merits of the jury courts, and on appropriate policies towards Muslim "fanatics". 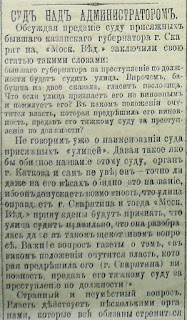 While it had taken me over a year to make sense of all the details belonging to the second part of the Skariatin story (his gradual fall from grace), I still had no answer to the question of what happened to him in the end. This is when I discovered the lines mentioned at the beginning of this blog post. The simple truth was that Skariatin had been pardoned by the tsar, and so there was not much point in the press continuing the debate about his virtues and vices. But let’s be clear about this. When you look at the actual manifesto mentioned by Novoe Vremia, you will not find any names in it. The category of crime the former governor was accused of, “serious beatings”, was among those selected for broad pardons on the occasion of the coronation of Alexander III. In other words, the crime was pardoned, not the person.

In a way, and given the extraordinary circumstances and cultural implications of Skariatin's brutal actions, this was a soundless and somewhat unsatisfactory end to the final chapter. And yet, it also reflected the ambiguities and unpredictability of legal culture in reform-era Russia.

Posted by Stefan Kirmse at 9:47 AM