Mitchell on The Speculation Economy: How Finance Triumphed Over Industry

Lawrence E. Mitchell, George Washington University Law School, has posted on SSRN the prologue and table of contents of his new book, The Speculation Economy: How Finance Triumphed Over Industry (Berrett-Koehler, 2007).

[Note to dissertation writers: this is exactly how to get the word out about your dissertation without jeopardizing your ability to publish it as a book. More on that here.]
Here's Mitchell's SSRN abstract:
The Speculation Economy identifies the moment in American history when finance 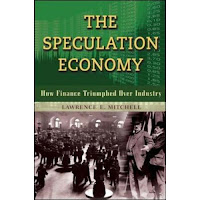 triumphed over industry. It shows how the birth of the giant modern corporation spurred the rise of the stock market and how, by the dawn of the 1920s, the stock market left behind its business origins to become the very reason for the creation of business itself. The consequent widespread distribution of intrinsically speculative common stock embedded speculation into the capital structures of most large American corporations.
The stock market become the driving force of the American economy in the first decade of the 20th century as a result of the birth of the giant modern corporation. The Speculation Economy tells the story of the legal, financial, economic and social transformations that allowed financiers to collect companies and combine them together into huge new corporations for the main purpose of manufacturing stock and dumping it on the market. Businessmen started to make more money from legal and financial manipulation than from practical business improvements like innovations in technology, management, distribution, and marketing.
The Speculation Economy explains how and why, at the turn of the 20th century, the stock created by the giant modern corporation became dispersed throughout the market. It shows the shift in attitudes of ordinary Americans from cautious bond buyers into eager stock speculators. At the same time, it shows how a federal government wedded to an outdated economic model and struggling to expand its own power failed to regulate finance and thus missed the chance to control corporations. While politicians argued, finance came to dominate industry, and as stock ownership spread widely throughout society, the stock market came to dominate finance.
The Speculation Economy examines this history in detail from the perspectives of the economic history of the growth of the market, the social history of early stockholding, the intellectual history of financial analysis of the era, the federal regulatory attempts to control the giant combinations, and the roots of modern securities regulation that emerged from the antitrust debate of the first decade of the 20th century.
The downloadable paper includes the Table of Comments and Prologue of The Speculation Economy.
And here are the blurbs:
"Mitchell highlights two of the most pivotal events in our history of modern finance: the rise of Wall Street and investment banking as a key factor in American capitalism and the federal government's response to the ever more complex role of finance capitalism. Mitchell's writing is graceful, comprehensive, and persuasive that as significant as the story of trusts and the trustbusters has been, the rise of finance capitalism and ultimately its federal coordination through such agencies as the Federal Reserve System and the Securities and Exchange Commission may be even more important."-Joel Seligman, President, University of Rochester and author, the Transformation of Wall Street.

"Lawrence Mitchell's new work is full of fresh insight about the rise of what he calls `American corporate capitalism.' Anyone interested in the development of our modern financial markets will be richly rewarded by a careful reading."-Harvey J. Goldschmid, Dwight Professor of Law, Columbia University, former Member, United States Securities and Exchange Commission
"Professor Mitchell's provocative thesis is that the development of the modern American public corporation was not an organic process but rather occurred almost overnight at an identifiable point in time and as a result of identifiable political and economic forces. This important new work helps us understand the forces that continue to shape the dominant form of economic actor of our time."-Stephen M. Bainbridge, William D. Warren Professor of Law, UCLA School of Law

"An impressive work of legal, economic and historical scholarship that will enrich today's debate over corporate accountability and regulatory policy."-Charlie Cray, director of the Center for Corporate Policy and co-author of The People's Business: Controlling Corporations and Restoring Democracy
Posted by Mary L. Dudziak at 9:17 AM