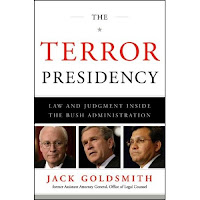 In October 2003, President Bush appointed Goldsmith, a self-described conservative who proudly proclaims that he is not a civil libertarian, head of the Justice Department's Office of Legal Counsel, thus making him chief adviser to the president about the legality of presidential actions. Ten months later, Goldsmith resigned because he could not endorse the unlawful policies the administration had implemented in the war on terror.

Shortly after taking office, Goldsmith reviewed a series of highly confidential opinions written by his predecessors in the Bush administration that defended the legality of "some of the most sensitive counterterrorism operations in the government." To Goldsmith's shock and dismay, he found that some of these opinions "were deeply flawed: sloppily reasoned, overbroad, and incautious in asserting extraordinary constitutional authorities on behalf of the President." What was going on?

In part, "The Terror Presidency" recounts Goldsmith's personal journey during the 10 months he served the president. It describes in considerable detail, consistent with the need to protect classified information, his conversations with John Ashcroft, Alberto Gonzales, David Addington (counsel to the vice president) and other Bush insiders. It is a fascinating and unnerving story. But what makes this work particularly compelling is not its inside-the-White-House anecdotes, but Goldsmith's institutional, historical and legal analyses of the unique challenges that confronted the White House after 9/11....
[Goldsmith suggests that 20th century reforms limiting executive power, in response to abuses in the past, though enacted for good reasons] had a powerfully intimidating effect on government officials, particularly because most of these laws are vaguely worded. Public officials engaged in protecting the national security worry that "investigators acting with the benefit of hindsight" might someday prosecute them for their "heat-of-battle judgment calls." Moreover, these officials are acutely aware that even if they emerge " 'innocent' " from such a prosecution, the investigation itself "can produce reputation-ruining dishonor and possibly end one's career."

The caution generated by this new legal environment has been "reinforced by the swarm of lawyers that rose up in the military and intelligence establishment to interpret" these laws and "provide cover for those asked to act close to the legal line." Over the years, intelligence officers "seeking to avoid 'retroactive discipline' increasingly sought lawyers' permission before acting." By the time of 9/11, "a paralyzing culture of risk-averse legalism" had spread through the military and intelligence Establishments. "[S]pooked by cautious lawyers" -- there are now 10,000 lawyers in the Defense Department alone -- intelligence officers, according to Goldsmith, "failed to take actions that might have prevented the 9/11 attacks."...
To understand this book, it is necessary to keep in mind that Goldsmith generally agrees with the Bush administration about the measures the government must take to protect national security. His objection is not to the policies, but to the way they were adopted. Put differently, he is concerned less with civil liberties than with the separation of powers....

The net effect of the Bush administration approach has been deeply ironic. Although "the President and Vice President wanted to leave the presidency stronger than they found it," they "achieved the opposite." By unlawfully disregarding statutory, international and constitutional law, they "borrowed against the power of future presidencies -- presidencies that . . . will be viewed by Congress and the courts . . . with a harmful suspicion and mistrust." Because of the Bush administration's obsession with excessive presidential power, our nation and our democracy are less secure.
Read the full review here.
Posted by Mary L. Dudziak at 11:30 AM