On Autherine Lucy and a Barber Shop

From Al Brophy at Property Prof, a reminiscence from Thomas Linton, who is a Presbyterian minister and a Tuscaloosa barber, in the Tuscaloosa News, about the role of a barber shop in a critical moment in civil rights history:

"I was a kid when Authurine Lucy tried to attend the University of Alabama," John Linton said in telephone interview from his home. "It was an outrage."

That February day in 1956 when Authurine Foster Lucy was suspended from the university, whites pelted her with eggs and state troopers escorted her to the black-owned newspaper, The Alabama Citizen, where a throng of more than 300 gathered. The paper was two shops away from the barber and then-beauty shop. 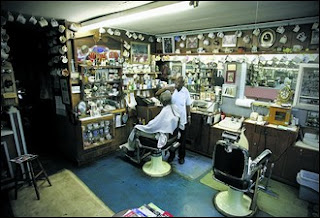 Robert Wade, 87, ran the linotype machine at the black newspaper. He recalled his indignation of that day.

"I had lost three brothers in World War II," said Wade, owner of a Tuscaloosa print shop. "I couldn't understand why blacks could serve their country but weren't accepted at a university."
Thomas Linton said that Lucy sought refuge in the barbershop, where beauticians helped her wash off the mess.

"It was a gathering place," John Linton said. "I saw some tremendous things happen there when I was a kid." ...
Union Morrow, a 70-year-old brick layer and Tuscaloosa resident, has barbered with Linton for 59 years. They grew up chopping cotton together on their family's small farms in Mantua, in Greene County. Linton's fortitude made a difference to him.

"I always wanted to emulate him because he was a model," said Morrow, who still lays brick and taught the craft at Fredd and Shelton State community colleges. "He was instrumental in change. He was a peaceable, very religious and down-to-earth person. He had a great conviction that everyone should be treated fairly."
More from Al is here. The rest of the Tuscaloosa News story is here.
Posted by Mary L. Dudziak at 12:09 PM