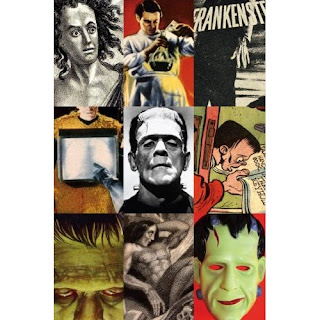 "I saw -- with shut eyes, but acute mental vision, -- I saw the pale student of unhallowed arts kneeling beside the thing he had put together. I saw the hideous phantasm of a man stretched out, and then, on the working of some powerful engine, show signs of life, and stir with an uneasy, half vital motion," wrote Mary Godwin, quoted in Louis Bayard's review of FRANKENSTEIN: A Cultural History by Susan Tyler Hitchcock (Norton) in today's Washington Post Book World. Bayard continues:
A monster wasn't the only thing stirring in the dreams of teenaged Mary Godwin. A vocation was awakening, too. The lover of poet Percy Shelley and daughter of ur-feminist Mary Wollstonecraft, young Mary knew enough of literature and commerce to realize she was on to something. "What terrified me will terrify others," she reasoned, and she was not even half wrong. As Susan Tyler Hitchcock's delightful cultural history reminds us, the monster that Mary fashioned from her slumbers is still alive and kicking: "in our bookstores, on our film and television screens, from morning cartoons to wee-hours rerun movies. He plays roles in advertising and political debate, he appears at public library story hours and on graduate-level reading lists. He is both a joke and a profound ethical dilemma."
But in the beginning, he was the product of a dare, thrown down by Lord Byron in that rainy Geneva summer of 1816: "We will each write a ghost story." Byron and Shelley bowed out, but Mary Godwin found a voice. Drawing on a private brew of philosophy, literature and myth, she discovered probably her most proximate inspiration in the writings of Luigi Galvani, who had used electrical currents to trigger movements in disembodied frog legs. Readers looking for more science than that will have to look elsewhere, and anyone coming to the original story from the Hollywood back lot will be startled to find that Victor Frankenstein's monster, after a brief setback, learns both to speak and read. Goethe, Plutarch and, fittingly enough, Paradise Lost are among the texts he marshals against his creator, who dies unmolested on an Arctic voyage, mourned by the creation he has once again abandoned....

"This is our monster," writes Susan Tyler Hitchcock. "To know him is to know ourselves."

Continue reading here.
Posted by Mary L. Dudziak at 12:42 AM