The latest issue of the AHA Perspectives on History brings word that Laura F. Edwards, Duke University, has won the American Historical Association's Littleton-Griswold Prize in American Law and Society for The People and Their Peace: Legal Culture and the Transformation of Inequality in the Post-Revolutionary South (University of North Carolina Press). (Edwards discussed her researching and writing of the book here and here.)

The Prize was not announced at the annual meeting of the American Society for Legal History, but at the ASLH's annual luncheon Hendrik Hartog, Princeton University, chair of the AHA committee, read the following statement:

We write as individual members of the ASLH. We served this past year as members of the selection committee of the Littleton-Griswold Book Prize awarded by the American Historical Association. Early in our deliberations we considered whether the new three volume Cambridge History of the Law in America, edited by Christopher Tomlins and Michael Grossberg, should be included in our deliberations. In the end we decided that it should not, that we wanted the prize to remain as it had been for many years: a prize for the best monograph in American legal history. 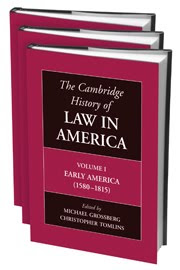 But all of us felt that the publication of these three volumes should not go unmarked and uncelebrated. The extraordinary readability and the synthetic power of many of the essays in the volumes are reason enough for celebration. The conceptual frameworks that the editors have introduced--among others, the central significance of a "long nineteenth century," and the imperial and Atlantic world focus of the first volume--will mark our field for a generation. Every sentient legal historian will find something to argue with and about in these volumes. Some of us will want to challenge the synthetic enterprise itself, perhaps on the grounds of prematurity, perhaps out of belief that a project dedicated to generalizations about the history of law "in America" is either too broad or too narrow. The volumes clearly and precisely capture a particular historiographic moment, and one can be certain that our field will soon view that moment as one that has passed. Still, the appearance and availability of these volumes is not just one more measure of the amazing vitality and energy of our field. The Cambridge History of the Law in America will remain, we are confident, a permanent monument to our growth and maturation as a discipline.