Nackenoff and Sullivan on Women Lawyers and Progressive-Era Governance

Carol Nackenoff, Swarthmore College, and Kathleen Sullivan, Ohio University, have posted Women Lawyers and Governance in the Progressive Era, which they presented at the Annual Meeting of the American Political Science Association in September. Here’s the abstract: 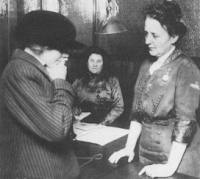 Progressive Era court reform led to creation of new courts that had both formal and informal positions, some of which were filled by women lawyers and representatives of women's organizations. The Juvenile Court in Chicago, the Chicago Morals Court, and the New York Night Court (subsequently Women's Court) differed in the network of activists promoting their creation, and therefore also differed in the amount of influence organized women and women lawyers wielded in these institutions.