Greene on Ruffin and the Shadows of Southern History

Sally Greene, Center for the Study of the American South, has posted Judge Thomas Ruffin and the Shadows of Southern History, which is forthcoming in Southern Cultures 17 (Fall 2011).  Here is the abstract: 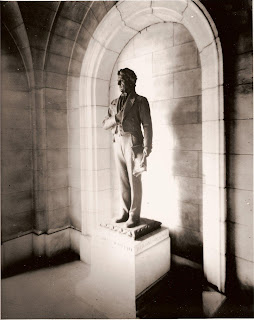 The statue of North Carolina Supreme Court Judge Thomas Ruffin that stands in a shadowy alcove at the entrance of a state court building in Raleigh was erected in 1915, toward the conclusion of a period of memorialization in the American South that was intended to reinforce in the public’s imagination a coherent story of American history that began with the Founding Fathers, continued through Robert E. Lee and the narrative of the “Lost Cause,” and worked to evoke “old family heritage, Anglo-Saxon supremacy, and military and political heroism.” Although Ruffin’s authorship of State v. Mann (1829), a case well known in its time (and now) for the stridency of the rhetoric with which Ruffin upholds the “power of the master,” is nowhere mentioned in the documentation surrounding the creation and dedication of the statue, that connection would have been inescapable to a white audience, which would have been largely sympathetic. But an emancipationist counternarrative, which was never really silenced, survives as a reminder of the strength and resilience of generations of Americans committed to equal justice under the Constitution. A recognition of this counternarrative has the potential to change the way we view Ruffin’s statue: the statement of the fixed and irrefutable power of law that it was no doubt intended to make unfolds into a conversation about the uses of law by the powerful. Such a shift of perspective, in turn, invites us into a broader reconsideration of our ways of navigating the contested terrain of public commemorative art.