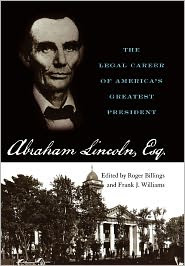 The volume's origins are in a special 2009 issue of the Northern Kentucky Law Review. To the four essays published there, the editors added eight. According to reviewer R. B. Bernstein (New York Law School), "[a]ll are clear and well-written, and many are wonderfully illuminating." He recommends the book for "a wide audience – including Lincoln scholars, legal and constitutional historians, Civil War specialists, and general readers fascinated by Lincoln."

Here's a taste of the review:

Though pivotal for understanding Abraham Lincoln, his life as a lawyer – the subject illuminated by this excellent symposium – has languished in neglect until recently. The essays collected in the book under review make two points: first, that Lincoln was a great lawyer, and, second, that those qualities making him a great lawyer were integral to his Presidency and to his claims to Presidential greatness. Further, in their multifaceted account of Lincoln as lawyer, these essays prove the value of studying the legal career of a great historical figure – an enterprise already represented by projects documenting the law practices of John Adams (Wroth and Zobel 1965), Alexander Hamilton (Goebel and Smith 1964-1981), and Daniel Webster (Konefsky and King 1982-1983).

In the full review, available here, Bernstein summarizes previous scholarship on Lincoln's legal career and briefly discusses each essay. He concludes by pondering why this topic has not attracted more scholars and pleading for further research.
Posted by Karen Tani at 4:00 PM