Richter, Before the Revolution: America's Ancient Pasts, and more in the book reviews

Before the Revolution: America’s Ancient Pasts by Daniel K. Richter is reviewed by J.H. Elliott in the New York Review of Books.  Richter is author of, among other works, the acclaimed Facing East from Indian Country: A Native History of Early America.  During a time when "Founders Chic" is a trend, as Mary Beth Norton notes today in the New York Times, it's helpful to turn to a work that sets North American history in a broader context. One thing I especially like about Elliott's review is that it places Richter's new book in conversation with the broader literature it is a part of.

continued to be shaped by three defining elements. It was Anglocentric, in the sense that it placed the weight of its emphasis on the contribution of British settlers, with some assistance from continental Europeans, primarily those of Teutonic origin, who were granted a kind of honorary Anglo status. It was teleological, in the sense that everything in the story built up to a logical conclusion in the winning of independence. And it was exceptionalist, in the sense that it was a story like no other about a nation that itself was like no other.

These three pillars have been undermined in historical work over the past few decades, Elliott writes.  "As far as teleology is concerned, the Whig approach to history, with its retrospective selection of those features of the past that are held to explain a distinctive, and equally selective, interpretation of the present, has fallen out of favor."  In contrast to determinist readings, "historians are now more likely to see it as embracing a range of possibilities, and have become more aware of the need to keep their eyes open for the paths not taken."  But it is the "Anglocentric pillar" that has "crumbled most dramatically."

Historians have embraced Atlantic history, setting American colonial history in a transnational context, but along the way new questions have arisen.  How far does this Atlantic-centered history press into the interior of North America?  And new works on American Indians in the interior raise questions about the Atlantic framing.  (On this point, Elliott recommends Paul W. Mapp's new book, The Elusive West and the Contest for Empire, 1713–1763, which takes American colonial history from the Atlantic to the Pacific.)

Richter's new book takes up the issue of how to write a synthetic history of this era that pulls the insights from new histories together with important parts of the traditional narrative.  In this layered narrative, "there is no better antidote to the tendency to see the Revolution as beginning the world again than to take the North American story back to the Indian settlements at Chaco Canyon (in present-day New Mexico) and Cahokia (in present-day Illinois), and show how their inhabitants, and their descendants, contributed to the shaping of the world that the Founding Fathers inherited and wanted to remake."

Richter does not build to an uplifting end-point with the American revolution, but instead presents "a dark and brutal story," "a history of violence."  Ultimately, "Richter forcefully brings home to us that the American past belongs to many peoples, and that none should be forgotten."  If you're going to read one book review this weekend, this is it.  Read the rest here. 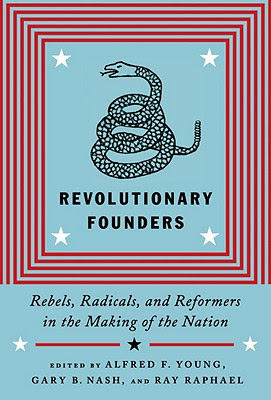 Elsewhere this weekend, Revolutionary Founders: Rebels, Radicals, and Reformers in the Making of the Nation, edited by Alfred F. Young, Gary B. Nash and Ray Raphael is reviewed by Mary Beth Norton in the New York Times.  At least two legal historians are in the volume: Wythe Holt, "The New Jerusalem: Herman Husband’s Egalitarian Alternative to the United States Constitution," and Woody Holton, "The Battle Against Patriarchy That Abigail Adams Won."  The editors of the collection


assert bluntly that the gentry who signed the Declaration of Independence and the Constitution “opposed popular democracy and social equality. . . . They did not hold fundamental values that we accept as common currency today.” The book’s goal, they explain, is to help Americans “grasp the full scope of the American Revolution” by taking “seriously its most progressive participants” and incorporating “them into our national narrative.”

Still, various omissions mean that the book is ultimately "one step, but only one, toward a comprehensive account of the nation’s origins."  Read the rest here.

Two books on Germany are taken up: EXORCISING HITLER: The Occupation and Denazification of Germany by Frederick Taylor in the Boston Globe, and Erik Larson, In the Garden of Beasts: Love, Terror, and an American Family in Hitler's Berlin in the Washington Post.
Posted by Mary L. Dudziak at 11:27 AM