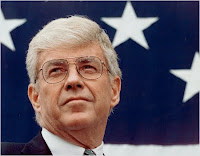 Last month the Miller Center of Public Affairs and the Jack Kemp Foundation "hosted a day-long conference on April 18 that brought together key figures who helped enact major tax-reform legislation during the Reagan administration. The gathering recorded for history the inside story of the Tax Reforms of 1981 and 1986, which were achieved at a time of deep partisan division, and explored how those lessons can be applied today.

Archived webcasts of the conference are here.

Image credit
Posted by Dan Ernst at 10:30 AM