Bird's "Press and Speech under Assault"

Wendell Bird, a Visiting Scholar at Emory Law School and a partner at the Atlanta law firm of Bird, Loechl, Brittain, and McCants, has published Press and Speech Under Assault: The Early Supreme Court Justices, the Sedition Act of 1798, and the Campaign against Dissent (New York: Oxford University Press, 2016).  From the publisher: 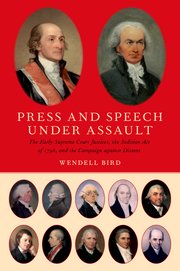 The book begins with the views of the pre-Marshall justices about freedoms of press and speech, before the struggle over the Sedition Act. It finds that their understanding was strikingly more expansive than the narrow definition of Sir William Blackstone, which is usually assumed to have dominated the period. Not one justice of the Supreme Court adopted that narrow definition before 1798, and all expressed strong commitments to those freedoms.

The book then discusses the views of the early Supreme Court justices about freedoms of press and speech during the national controversy over the Sedition Act of 1798 and its constitutionality. It finds that, though several of the justices presided over Sedition Act trials, the early justices divided almost evenly over that issue with an unrecognized half opposing its constitutionality, rather than unanimously supporting the Act as is generally assumed. The book similarly reassesses the Federalist party itself, and finds that an unrecognized minority also challenged the constitutionality of the Sedition Act and the narrow Blackstone approach during 1798-1801, and that an unrecognized minority of the other states did as well in considering the Virginia and Kentucky Resolutions.

At each of these steps, this book challenges conventional views in existing histories of the early republic and of the early Supreme Court justices.