We have from Mario Cajas-Sarria, Associate Professor, Icesi University School of Law, Cali, Colombia, word that he has published, in Spanish, The Construction of Colombian Constitutional Justice: A Historical and Political Perspective, 1910-1991, in Revista Jurídica Precedente 7 (2015): 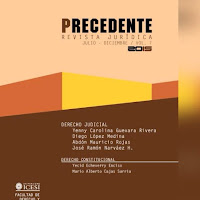