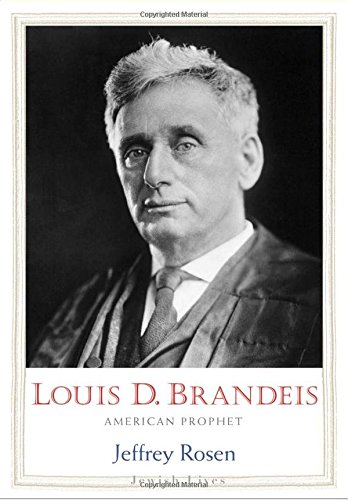 With classes finished, legal historians can turn to beach reading. Here are some options:

In the New York Times, Adam Cohen reviews Jeffrey Rosen’s Louis D. Brandeis: American Prophet (an “excellent … concise and sympathetic exploration of Brandeis’s main intellectual causes”). In the Washington Post, Justin Driver reviews a new book on the Burger Court by Michael J. Graetz and Linda Greenhouse, who “contend that the dominant assessment of the Burger years severely understates the legal transformation that occurred during this period.”


Stephen Rohde reviews Carol Berkin’s The Bill of Rights: The Fight to Secure America’s Liberties, which uses letters and speeches to show “how these 10 amendments helped quell widespread opposition to the new Constitution and ensure popular support for the new and more energetic federal system of government.”  Interested readers may also enjoy the LARB’s review of Hamilton and reflection on its characters--mainly the complex and contradictory Jefferson as well as the misrepresented General Lee--which “exist not to define but to provoke.”

The Guardian published Jenny Uglow’s review of The Last Royal Rebel by Anna Keay.  Keay tells the story of the Duke of Monmouth, Charles II’s illegitimate son, who in 1685 attempted to unseat the Catholic James II, and whose popularity inspired acts of “judicial revenge” and exclusion bills to bar Catholics from the throne.

In the Law and Politics Book Review, Logan Strother reviews Ilya Somin’s The Grasping Hand: Kelo v. New London and the Limits of Eminent Domain, which offers “a significant rejoinder to the conventional wisdom that “public use” was broadly interpreted in the early Republic and post-bellum periods, though the historical record certainly leaves room for debate.”

The New Books Network features a review of Edlie Wong’s Racial Reconstruction: Black Inclusion, Chinese Exclusion, and the Fictions of Citizenship, which explores the reconstruction era as a transition from black chattel slavery, to a system of (nominally) voluntary, wage labor i.e. Chinese contract labor (coolieism), and poses the important question of whether coolieism constituted a form of slavery or was indeed, a transition to free labor.

Finally, Laura Miller writes in Slate about Nancy Isenberg’s White Trash: The 400-Year Untold History of Class in America, a “a deep-diving history” of the white-trash stereotype from Jamestown to the present. Isenberg begins with “British beliefs that the working class was truly a separate race from the middle and upper classes” and offers lessons about the role of class, race and fear-mongering in political campaigns.
Posted by Smita Ghosh at 3:00 AM