New from the University of Missouri Press: Missouri Law and the American Conscience: Historic Rights and Wrongs, edited by Kenneth H. Winn. A description from the Press: 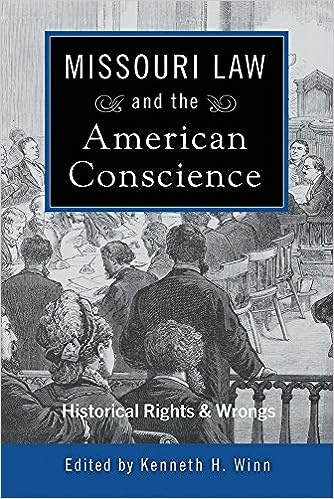 Until recently, many of Missouri’s legal records were inaccessible and the existence of many influential, historic cases was unknown. The ten essays in this volume showcase Missouri as both maker and microcosm of American history. Some of the topics are famous: Dred Scott’s slave freedom suit, Virginia Minor’s women’s suffrage case, Curt Flood’s suit against professional baseball, and the Nancy Cruzan “right to die” case. Other essays cover court cases concerning the uneasy incorporation of ethnic and cultural populations into the United States; political loyalty tests during the Civil War; the alleviation of cruelty to poor and criminally institutionalized children; the barring of women to serve on juries decades after they could vote; and the creation of the “Missouri Court Plan,” a national model for judicial selection.

You can view the Table of Contents here.
Posted by Karen Tani at 12:30 PM