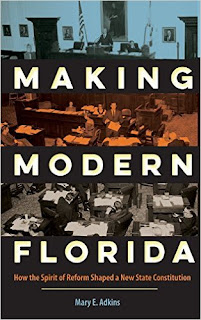 Mid-twentieth-century Florida was a state in flux. Its explosive growth could be seen in rapidly burgeoning cities and suburbs, the development of the Kennedy Space Center during the space race, and the impending construction of Walt Disney World. Florida’s antiquated 1885 constitution was no match for the dramatic changes that took place in the makeup of the state during this time.

Many people recognized the shortcomings of the old constitution and worked to overhaul it. However, a small group of rural legislators known as the “Pork Chop Gang” controlled the state and thwarted several attempts to modernize the constitution. But through court-imposed redistribution of legislators and the hard work of state leaders, the constitution was modernized and the executive branch was reorganized.

In Making Modern Florida, Mary Adkins goes behind the scenes to examine the history and impact of the 1966–68 revision of the Florida state constitution. With storytelling flair, Adkins uses interviews and detailed analysis of speeches and transcripts to vividly capture the moves, gambits, and backroom moments necessary to create and introduce a new state constitution. This carefully researched account brings to light the constitutional debates and political processes in the growth to maturity of what is now the nation’s third largest state.

Endorsements after the jump:
“Adkins portrays a major turning point in the development of modern Florida and has done a great job of bringing to life so many of the people who achieved this massive rewrite of our constitution.”—Talbot D’Alemberte, former president of the American Bar Association and author of The Florida State Constitution

“Deftly captures the story of the politics and powerful personalities who created a more modern government structure for Florida.”—Neil Skene, former editor and president of Congressional Quarterly, Inc.
Posted by Dan Ernst at 12:30 AM