Cox and others on Public Indecency in England

Public Indecency in England 1857-1960: 'A Serious and Growing Evil' came out with Routledge earlier this year. The volume is co-authored by David J. Cox (U. of Wolverhampton), Kim Stevenson (Plymouth U.), Candida Harris (Plymouth U.), and Judith Rowbotham (independent scholar based in London). From the publisher: 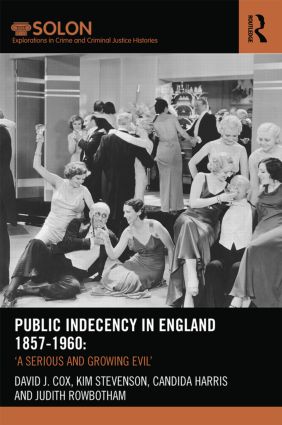 Throughout the nineteenth century and twentieth century, various attempts were made to define and control problematic behaviour in public by legal and legislative means through the use of a somewhat nebulous concept of ‘indecency’. Remarkably however, public indecency remains a much under-researched aspect of English legal, social and criminal justice history.
Covering a period of just over a century, from 1857 (the date of the passing of the first Obscene Publications Act) to 1960 (the date of the famous trial of Penguin Books over their publication ofLady Chatterley’s Lover following the introduction of a new Obscene Publications Act in the previous year), Public Indecency in England investigates the social and cultural obsession with various forms of indecency and how public perceptions of different types of indecent behaviour led to legal definitions of such behaviour in both common law and statute.
This truly interdisciplinary book utilises socio-legal, historical and criminological research to discuss the practical response of both the police and the judiciary to those caught engaging in public indecency, as well as to highlight the increasing problems faced by moralists during a period of unprecedented technological developments in the fields of visual and aural mass entertainment. It is written in a lively and approachable style and, as such, is of interest to academics and students engaged in the study of deviance, law, criminology, sociology, criminal justice, socio-legal studies, and history. It will also be of interest to the general reader.

More after the jump.
"A welcome historical study of behaviour that often divides everyday opinion--public drinking, obscenity, vice and immorality--some of which is prosecuted in court, some ends up in the newspapers, and much of which is discussed in the pub. Not least, the book reminds students, legal researchers, historians, and sociologists that a great deal of human behaviour is often regarded as 'offensive'." - Barry Godfrey

Introduction: Defining Public Indecency
1. The Historical Background: Indecency And The Rise Of Moral Activism
2. The Intensification Of The Indecency Agenda 1857-1885
3. ‘Demoralization’ And Moral Activism: Fighting The ‘Serious And Growing Evil’ 1885-1908
4. A Real Or Imagined Enigma? ‘Stemming The Tide Of Corruption’: Indecency 1908-1960
5. Indecorous And Inexpedient: Visual And Aural Indecency In The Dramatic Arts 1857-1960
6. Indecency In Practice: The Policing And Judicial Response
7. Intoxicated Indecency: How The Drink Problem Was Resolved
8. Conclusion.