Appleby's "Role of the Solicitor-General"

Gabrielle Appleby, an Associate Professor of Law at the University of New South Wales has published Role of the Solicitor-General: Negotiating Law, Politics and the Public Interest with Hart Publishing: 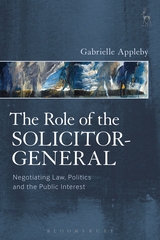 But the Solicitor-General's position, as both an internal integrity check on government and an external warrior for government, gives rise to competing pressures: between the law, politics and the public interest. The office of the Solicitor-General in Australia has evolved many characteristics across the almost two centuries of its history in an attempt to navigate these tensions. These pressures are not unique to the Australian context. The understanding of the Australian position provided by this book is informed by, and will inform, comparative analysis of the role of government lawyers across the world.