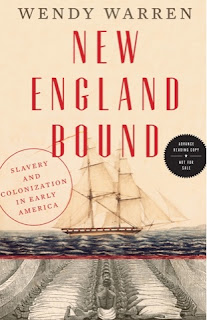 Independence Day is probably big for legal history buffs.  But if you're not reading (or watching) themed content, you might enjoy these book reviews.

In the NY Times, Christopher Brown reviews Wendy Warren’s New England Bound: Slavery and Colonization in Early America (which “conveys the disorientation, the deprivation, the vulnerability, the occasional hunger and the profound isolation that defined the life of most African exiles in Puritan New England, where there was no plantation community.”) Legal historians may also be interested in Sam Moyn’s review of Spiral: Trapped in the Forever War, journalist Mark Danner’s take on the war on terror. As a historian, Moyn takes issue with Danner’s argument that the war is “exceptional” in its use of torture. Instead, Moyn argues, the war on terror “has been brought within law governing the conduct of hostilities to a remarkable extent,” which makes it all the more pernicious and “harder to rein in.” Moyn expands on the review in the Lawfare Blog.


In a dishearteningly well-timed piece, David Cole reviews three books about guns in America, including Pamela Haag’s history of the gun industry, in the NY Review of Books.

The Guardian recently published a short summary of Food Worth Fighting For, Josh Sutton’s history of food riots, an excerpt from Witness to the Revolution by Clara Bingham and a July Fourth reading list that includes Annette Gordon-Reed on Jefferson and the obligatory Hamilton mention.

The New Books Network features discussions with Marlene Trestman, author of Fair Labor Lawyer: The Remarkable Life of New Deal Attorney and Supreme Court Advocate Bessie Margolin; Michael Barnett, whose The Star and the Stripes explores the foreign policy priorities of American Jews; Gregory Domber, author of Empowering Revolution: America, Poland, and the End of the Cold War and Anthea Kraut, whose Choreographing Copyright: Race, Gender and Intellectual Property Rights in American Dance reveals how shifting conceptions of race and gender shaped the way we think of dance, property and ownership.