A Carnival of Animals at the YLS Rare Book Room

(We’re not sure you’re in the mood for whimsy right now, but here goes.)  From former LHB guest blogger Mark S. Weiner we learn of the opening today of an exhibit at the Rare Book Room of the Yale Law Library, “Woof, Moo, Grr: A Carnival of Animals in Law Books.”  From the exhibit: 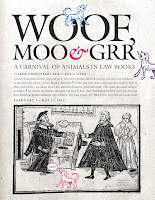 In late 2016, a group of over twenty animals—speaking through their chosen representative, Judge Mouse Marshall—approached a frequent visitor to the Rare Book Room at the Yale Law Library to express a gnawing concern. Tapping the visitor politely on the shoulder, Judge Marshall explained that many animals had long ago taken up residence in the rare book “vault,” but that they sadly had few opportunities to meet people out in the library. “Students, professors, visitors,” said Marshall with a squeak, “they don’t seem to realize we’re here. By the way, I think I smell something in your backpack. Is that a cheese sandwich?”

This exhibit grew from that initial conversation. Over a series of meetings, it was decided that the mouse and his colleagues would tell their stories in their own words, for human animals of all ages. They also were asked to share their names, which until now have been largely unknown—except those of Abby Smith’s cows and Judge Wise the owl, which are matters of public record. Unfortunately, only brief excerpts from their remarks can be shared here.

You may be surprised that so many animals live in the Rare Book Room. But law books with illustrations are one of the specialties of this library, and many illustrated law books have provided animals with especially welcome habitats. What different roles do animals play in these books? This exhibit explores that question, in the process quietly meditating on the relationship not only between animals and the law, but also between law and the imagination. Come with us and explore. And stop by the Rare Book Room, where many more animals are sleeping on the shelves, waiting to say hello.