We're catching up on a few titles published in Commonwealth countries back in 2015. Here's the first—from Federation Press, Military Law in Colonial Australia by Neil Preston, OAM. From the publisher: 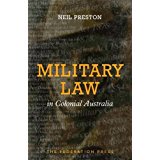 This book breaks new ground in reviewing the naval and military law of the Australian colonies before their federation in 1901. Its particular focus is on the disciplinary codes contained in Acts of Parliament and subordinate legislation. A disciplinary code takes a certain form having regard to the nature of the force to which it is to apply, which in turn depends on the circumstances in which the force is raised and its proposed role.

Matters dealt with include:

Table of Contents after the jump.


1. Establishing a penal colony
2. Loyal association: the first authentic local military force
3. Other local forces actual or proposed before 1850
4. The English experience with the raising of armed forces: a short survey to 1850
5. The struggle for responsible government and its influence on the raising of local forces
6. Background to the raising of local forces
7. Factors in the development of disciplinary codes for local forces
8. Private armies: the common law volunteers
9. The South Australian volunteers and militia
10.  Embryonic permanent naval forces: 1855-1865
11.   The Colonial Naval Defence Act 1865: myth and reality
12.   The volunteers: attempts to improve their quality and quantity: 1858-1877
13.   The Canadian and New Zealand experience after being granted responsible government
14.   The raising of colonial permanent forces – the early 1870s
15.   The Jervois reviews and consequent changes: 1877-1885
16.   A trend towards coordinated action: 1883-1900
17.   Aid to the civil power
18.   Summary and conclusions