"Historians in Court" at OAH 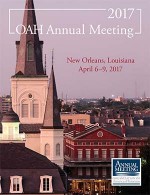 [The Organization of American Historians' recent mailing to members on its 2017 meeting in New Orleans highlights the following plenary session, on Thursday, April 6, 4:00 pm to 5:30 pm.]

Historians have increasingly responded when attorneys call on them to supplement strictly legal argument with additional corroborative and persuasive angles, especially in cases involving the assertion or defense of constitutional rights. This follows in a twentieth-century practice begun in 1908, when attorney Louis Brandeis successfully argued for state controls on women's employment conditions by bringing social scientific evidence of the strains women experienced. Not acting as advocates, but ostensibly providing impartial historical facts and opinion, historians have offered expert testimony that becomes part of important cases and also have written amicus curiae briefs that may possibly influence the court.

In this session, four historians will reflect on their significant experiences in this mode of making history matter in the present. Tomiko Brown-Nagin's comments stem from her involvement in cases on affirmative action in education, including Grutter v. Bollinger (2003), Parents Involved v. Seattle (2007), and Fisher v. Texas (2013). George Chauncey will discuss his participation as expert witness and author of amicus briefs in gay rights litigation from Romer v. Evans (1996) and Lawrence v. Texas (2003) to several more recent cases on equal marriage rights for same-sex couples, including U.S. v. Windsor (2013) and Obergefell v. Hodges (2015). Linda Gordon has co-authored historians' amicus briefs in major abortion rights cases, from Webster v. Reproductive Health Services (1989), where the Supreme Court upheld Missouri's restrictions on abortion rights, to Whole Women's Health v. Hellerstadt (2016) where the court struck down Texas' excessive requirements for abortion clinics. Richard White's service as an expert witness in tribal recognition and treaty rights cases in the Pacific Northwest extends back to 1977 and up to today.

Panelists will address several of the many pressing questions arising from this kind of endeavor. What kinds of historical evidence count in court? Are they acting as advocates or neutral experts? What are the differing ways that lawyers and historians read and use historical evidence? Does the history they contribute actually make a difference to the outcome of the case? Can any impact of historians' contributions be seen in change over time in the Supreme Court's interpretation of constitutional rights?
Posted by Dan Ernst at 9:30 AM