Brad Snyder, University of Wisconsin School of Law, has just published The House of Truth: A Washington Political Salon and the Foundations of American Liberalism (Oxford University Press): 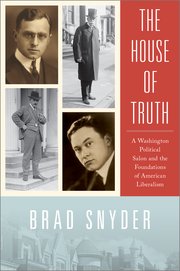 In 1912, a group of ambitious young men, including future Supreme Court justice Felix Frankfurter and future journalistic giant Walter Lippmann, became disillusioned by the sluggish progress of change in the Taft Administration. The individuals started to band together informally, joined initially by their enthusiasm for Theodore Roosevelt’s Bull Moose campaign. They self-mockingly called the 19th Street row house in which they congregated the “House of Truth,” playing off the lively dinner discussions with frequent guest (and neighbor) Oliver Wendell Holmes, Jr. about life’s verities. Lippmann and Frankfurter were house-mates, and their frequent guests included not merely Holmes but Louis Brandeis, Herbert Hoover, Herbert Croly - founder of the New Republic - and the sculptor (and sometime Klansman) Gutzon Borglum, later the creator of the Mount Rushmore monument.

Weaving together the stories and trajectories of these varied, fascinating, combative, and sometimes contradictory figures, Brad Snyder shows how their thinking about government and policy shifted from a firm belief in progressivism - the belief that the government should protect its workers and regulate monopolies - into what we call liberalism - the belief that government can improve citizens’ lives without abridging their civil liberties and, eventually, civil rights. Holmes replaced Roosevelt in their affections and aspirations. His famous dissents from 1919 onward showed how the Due Process clause could protect not just business but equality under the law, revealing how a generally conservative and reactionary Supreme Court might embrace, even initiate, political and social reform.

Across the years, from 1912 until the start of the New Deal in 1933, the remarkable group of individuals associated with the House of Truth debated the future of America. They fought over Sacco and Vanzetti’s innocence; the dangers of Communism; the role the United States should play the world after World War One; and thought dynamically about things like about minimum wage, child-welfare laws, banking insurance, and Social Security, notions they not only envisioned but worked to enact. American liberalism has no single source, but one was without question a row house in Dupont Circle and the lives that intertwined there at a crucial moment in the country’s history.

Professor Snyder's story on the book in Politico Magazine is here.  And here are some endorsements:

“For the first time, we have the real story of this incredible little galaxy that included such disparate figures as Felix Frankfurter, Walter Lippmann, and Gutzon Borglum, and reached out to cultivate and invigorate the aged Justice Oliver Wendell Holmes--with profound and lasting influence on the course of American politics. Brad Snyder tells this story with verve and insight. This is a major work in the history of this nation’s public life.” -- John Milton Cooper, Jr., author of Woodrow Wilson: A Biography

“With his deep understanding of history and the law, Brad Snyder has crafted a notably illuminating and refreshing book. Deeply researched and finely written, The House of Truth brings to life a group of brilliant friends whose passion for justice helped shape what became known as the American Century.” -- David Maraniss, author of Once in a Great City: A Detroit Story

“This dazzling book provokes reconsideration of the Progressive era, legal reform and modern American liberalism. I know of no other work that so ably transports its readers into the packed and exciting years of the early twentieth century.” -- Laura Kalman, Professor of History, University of California, Santa Barbara
Posted by Dan Ernst at 12:30 AM