Arlidge's "Lawyers Who Made America"

Anthony Arlidge, a Queen's Counsel for over thirty five years, has published The Lawyers Who Made America: From Jamestown to the White House with Hart Publishing 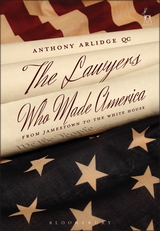 No other nation's creation, both politically and socially, owes such a debt to lawyers as the United States of America. This book traces the story of that creation through the human lives of those who played important parts in it: amongst others, of English lawyers who established the form of the original colonies; of the Founding Fathers, who declared independence and created a Constitution; of Abraham Lincoln, Woodrow Wilson, Justices of the Supreme Court and finally Barack Obama. Even Richard Nixon features, if only as a reminder that even the President is subject to the law. The author combines his wide legal experience and engaging writing style to produce a book that will enthral lawyers and laymen alike, giving perhaps a timely reminder of the importance of the rule of law to American democracy.