Scarfi, "The Hidden History of International Law in the Americas"

New from Oxford University Press: The Hidden History of International Law in the Americas: Empire and Legal Networks (April 2017), by Juan Pablo Scarfi (Argentine National Scientific and Technical Research Council/National University of San Martín, Argentina). A description from the Press: 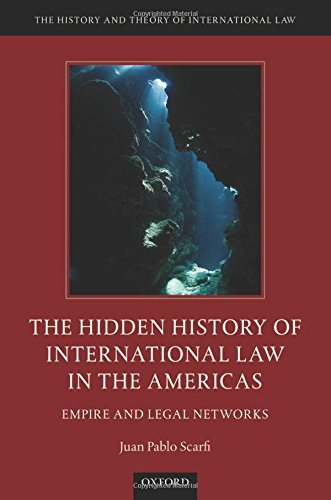 
"A deeply-researched eye-opening account of the interaction between U.S. imperialism and Pan-American aspirations in the making of international law in the Western Hemisphere. It offers a new angle into perennial inquiries about U.S.-Latin American relations, and a model for transnational intellectual history." --José C. Moya, Professor of History, Barnard College, Columbia University

"In reconstructing the ideology of Pan-Americanism, Juan Pablo Scarfi has shown how international law helps establish and secure hegemonic relations while also providing tools for those who might struggle to disturb them. With his insights into how and why the United States associated itself with international law from the nineteenth century on, Scarfi also recovers how the agenda of Latin Americans, notably Alejandro Alvarez, shaped outcomes. A brilliant debut."--Samuel Moyn