Cromwell Book Prize to Tani for "States of Dependency"

As I mentioned in an earlier post, LHB Blogger Karen Tani, UC Berkeley Law, received the Cromwell Book Prize at last weekend’s meeting of the American Society for Legal History for her States of Dependency: Welfare Rights, and American Governance, 1935-1972 (New York: Cambridge University Press, 2016).  Here is the citation: 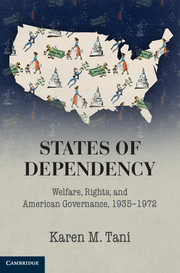 Historians and social scientists, Karen M. Tani maintains, have gotten the history of welfare and the rise of the American administrative state all wrong.  In this nuanced, fresh, original, and challenging social history of administrative law, waves of poverty reformers from the New Deal to the 1970s made dramatic advances in the treatment and understanding of the poor while being thwarted by larger legal values and structures such as the federal system itself.  Throughout the book, Tani casts a bright light on the middle managers, poverty reformers, and lawyers/administrators in the localities and the states whom the national policy makers charged to carry out the new reforms.  It was these bureaucrats who fleshed out the policies and implemented the changing values of welfare reform in the twentieth century United States.  In the first part of the book, these reformers/administrators sought uniformity, centralization, professionalization, and the establishment of legal rights of the poor.  And although federal law mattered, the most important action occurred on the ground in the localities and in the various states.  Beginning about 1950, in the second half of the work, reformers ran into resistance from exactly those localities and the states.  Federalism proved to be alive and well, and resistant to change.  State and local authorities curbed what they perceived as federal overreach, expressed their suspicion of the enterprise of bureaucratic governance, and acted on their long-simmering resentment of the intrusions of the New Deal into state and local affairs.  As a result, the limits of administrative government became clear which, in turn, inspired yet a new wave of lawyers and reformers.  They worked to establish that the poor were national citizens and used the federal courts to do so.  National citizenship carried with it a right against abusive state and local welfare policies.  National citizenship also entrenched the assumption in the culture the value that aid to the poor constituted income support and constituted a valid function of government.  This interpretation challenges older histories of administrative law, of women’s history, and social welfare history while demonstrating (most impressively) how legal history can transform conventions in non-legal history subfields such as women’s history.  Tani provides a compelling account of how the web of dependencies affected the poor, the balance of federalism, and the quality of American governance.

The overall chair of Advisory Committee on the Cromwell Prizes is John D. Gordan III.  The Book Prize Subcommittee was chaired by Thomas Mackey and included Felice Batlan, Sophia Lee, and Jonathan Levy.
Posted by Dan Ernst at 11:00 AM