Out this month from the Oxford University Press is Matthew Hale: On the Law of Nature, Reason, and Common Law: Selected Jurisprudential Writings, edited by Gerald J. Postema, University of North Carolina: 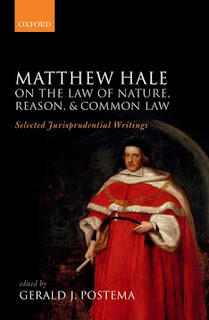 Lawyer, judge, public figure, historian, theologian, and amateur natural philosopher, Sir Matthew Hale worked and wrote in the middle decades of the seventeenth century, perhaps the most turbulent period of English political history. His reflections on reason, law, and political authority, unpublished in his lifetime, are collected in this volume. It sets Hale's previously unpublished Treatise on the Nature of Laws in General and touching the Law of Nature and his "Reflections on Mr Hobbes his Dialogue of the Laws" in context of other key works of legal and constitutional theory. The Treatise reveals a complex general understanding of law and of moral and legal reasoning. "Reflections" brings these general considerations to bear on English law, in his critical response to Hobbes's all-out attack on common-law jurisprudence. "Reflections" suggests a conception of judicial reasoning, and a view of political authority, that deepens the view Hale defends in the longer and more systematic work. His views on practical reasoning are elaborated and related explicitly to the discipline of law in his "Preface to Rolle's Abridgement" and in parts of his History of the Common Law. In the Treatise, Hale argues that human law is necessarily instituted in the practices and customs of specific communities, manifesting their consent; this view is enriched and deepened in the History and "Considerations touching Amendment of the Law". His views on the foundations of political authority, sounded in the Treatise, are argued at length in Prerogatives of the King and "Reflections". "Reflections" argues for necessary legal limits of ruling power and Prerogatives offers a systematic discussion of the nature and limits of political authority. Taken together, these writings offer a rich and subtle articulation of a classical common-law understanding of law, reason and authority.

Gerald J. Postema present these seminal writings in a modernized text for readers from philosophy, law, political theory, or intellectual history. He contributes an extended introduction setting out the theoretical and historical context of the works.

Editor's Introduction
I. Treatise of the Nature of Laws in General and touching the Law of Nature
II. The History of the Common Law of England
III. Preface to Rolle's Abridgment
IV. Considerations touching the Amendment or Alteration of Laws
V. Reflections on Mr Hobbes his Dialogue of the Laws
VI. Prerogatives of the King
VII. Jurisdiction of the Lords House or Parliament
Posted by Dan Ernst at 11:00 AM