[We have the following announcement from the 2017 Annual Meeting of the ASLH.] 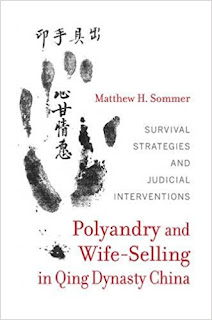 Matthew Sommer’s Polyandry and Wife-Selling in Qing Dynasty China is a masterful study of the marriage, sexual, and reproductive strategies of the rural poor. Drawing on twenty years of research and over 1,200 cases from central and local Chinese archives, Sommer’s book explores the prevalence of two legally prohibited and morally contra-normative practices: wife-selling and the marriage of one woman to multiple men. Husbands who could not support their wives and children sometimes brought in another man as an extra spouse in return for work or financial support. At the other end of the spectrum, a husband sometimes sold his wife to another man, who took her and her children under an agreement. The book shows why the rural poor pursued these strategies and why their villages tolerated them. It also reveals that magistrates charged by the state with enforcing a Confucian code of female chastity pragmatically accommodated the practices in the face of rural suffering. Sommer artfully weaves a narrative of gendered history from below. He shows that we cannot make a clean distinction between marriage and trafficking, or between marriage and prostitution. Sex work was in fact integral to marriage, and women’s sexual labor should be treated in this light. There is something here for everyone: law situated in the context of illegal and quasi-legal customary practices, female agency in a patrilineal and even murderously male-focused society, and real insight into the meaning of sex work, concubinage, marriage, remarriage, and brideprice (or dower) versus dowry. Sommer pushes back against gender histories that portray Chinese women only as victims, although he acknowledges that women’s agency does not make this a happy story. This powerful and concentrated study of non-elite behavior will be of lasting significance not only for the field of Chinese legal history, but also for social and gender history, as well as for the history of sex, marriage, violence, and the family.