Rebecca E. Zietlow, University of Toledo College of Law, has published The Forgotten Emancipator: James Mitchell Ashley and the Ideological Origins of Reconstruction, in the series Cambridge Historical Studies in American Law and Society, edited by Christopher L. Tomlins, University of California-Berkeley. 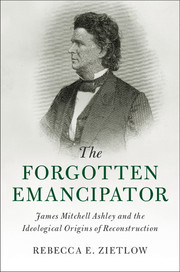 Congressman James M. Ashley, a member of the House of Representatives from 1858 to 1868, and was the main sponsor of the Thirteenth Amendment to the American Constitution, which declared the institution of slavery unconstitutional. Rebecca E. Zietlow uses Ashley's life as a unique lens through which to explore the ideological origins of Reconstruction and the constitutional changes of this era. Zietlow recounts how Ashley and his antislavery allies shared an egalitarian free labor ideology that was influenced by the political antislavery movement and the nascent labor movement - a vision that conflicted directly with the institution of slavery. Ashley's story sheds important light on the meaning and power of popular constitutionalism: how the constitution is interpreted outside of the courts and the power that citizens and their elected officials can have in enacting legal change. The book shows how Reconstruction not only expanded racial equality but also transformed the rights of workers throughout America.

Here are two, rather weighty endorsements:


Rebecca E. Zietlow is right - James M. Ashley has been all but forgotten and deserves to be remembered. Thanks to Zietlow, we can now appreciate Ashley's pivotal role in the pre-Civil War struggle against slavery, abolition during the war, and the battle for black rights during Reconstruction. But she also emphasizes his commitment to the rights of all labourers, and we would benefit today from recalling his vision of a 'free labour' society of equals.

James M. Ashley spent decades of the nineteenth century crusading against slavery, discrimination, and labor injustice - positions in absolute harmony with one another, as the author Rebecca E. Zietlow deftly shows. This readable biography reveals Ashley in his heroism, defeat, and contradictions. More than that, it illuminates the challenges that any old-line egalitarian faced in a modern, industrializing world. In Zietlow’s able hands, Ashley’s life becomes as significant for our present era as it was for his own.