God's Businessmen: Entrepreneurial Evangelicals in Depression and War, by the late Sarah Ruth Hammond (and edited by Darren Dochuk, Department of History, Notre Dame University), is out from the University of Chicago Press. 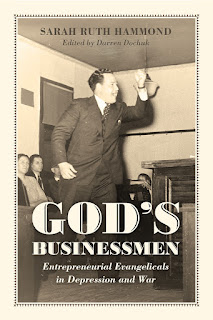 The evangelical embrace of conservatism is a familiar feature of the contemporary political landscape. What’s less well-known, however, is that the connection predates the Reagan revolution, going all the way back to the Depression and World War II. Evangelical businessmen at the time were quite active in opposing the New Deal—on both theological and economic grounds—and in doing so claimed a place alongside other conservatives in the public sphere. Like previous generations of devout laymen, they self-consciously merged their religious and business lives, financing and organizing evangelical causes with the kind of visionary pragmatism that they practiced in the boardroom.

In God’s Businessmen, Sarah Ruth Hammond explores not only these men’s personal trajectories but also those of the service clubs and other institutions that, like them, believed that businessmen were God’s instrument for the Christianization of the world. Hammond presents a capacious portrait of the relationship between the evangelical business community and the New Deal—and in doing so makes important contributions to American religious history, business history, and the history of the American state.

A celebration of the book and its author, The Religion of Business: In Honor of Sarah Hammond, will take place at Yale University on December 8, 2017.
Posted by Dan Ernst at 12:30 AM