Rethinking the Role of State Courts in the Lives of Black Southerners: What I've Learned

I've very much appreciated the opportunity to blog about the research in my new book Litigating Across the Color Line this month. Today, on my final day of blogging here, I thought I would reflect on some of the things that I have noticed and learned about black southerners’ participation in civil cases in state courts during this project.

1) Shifts in Legal Rights Were Aligned with Voting 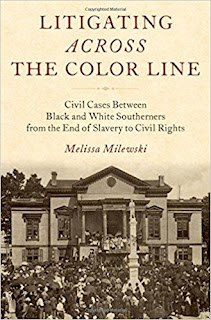 There was no sudden shift in what appellate civil cases between black and white southerners looked like as Reconstruction gradually ended in southern states. Instead, the shifts seem to be aligned to some extent with voting rights. The types of cases black litigants could participate in became much more narrow at the end of the 19th century as disfranchisement set in. Then, beginning in the 1920s as the Great Migration led to increases in black voting around the nation, black southerners' civil cases became much less constrained once again and began to engage a wide variety of issues. This broadening of cases continued in the 1940s as voter registration drives had some success in the U.S. South.

2) Civil Litigation continued throughout different periods, but shifted to fit the constraints of the time


Even as black southerners’ ability to litigate different kinds of civil cases in southern appellate courts widened or narrowed during different periods, African Americans continued to litigate civil cases against whites from 1865 to 1950. In other words, at no time did they actually stop interacting with state governments through the legal sphere. Instead, as their political and social constraints narrowed, they shifted the kinds of cases they litigated and how they presented themselves in their cases.

3) Black Southerners engaged with the government at multiple levels

In the cases I looked at, I found African Americans at times engaging the government at multiple levels over a single dispute– including engaging with the local, state, as well as the federal government.  The case of Henry Buie that I discussed in my blog post yesterday gives us one example of this engagement with the government at multiple levels. After his master took his mule, Henry Buie turned for assistance to the local branch of the Freedmen’s Bureau and successfully convinced them to take action in his cause. But it was not only federal power – but also state power that the freedman accessed. When his former master filed a civil suit to regain the mule, the former slave responded by hiring his own lawyer and fighting his former master’s claim in the local county court and then in the state supreme court. In this case alone, then, the suit was fought on at least three levels – before the Freedmen’s Bureau, before the local court, and before the state supreme court. In other cases, I found similar attempts to bring cases before multiple arbitrators and to attempt to pick the arbitrator that would be most sympathetic to their cause.

4) Government Institutions that seemed hostile could still be possible realms to exercise rights – if you could align your interests with the interests of those making decisions in that realm, or at least make your case seem harmless

I learned that government bodies that seem initially to be hostile to African Americans could still be institutions in which African Americans could have some success. Again and again – not only during Reconstruction, but in the two decades following as well as in the first half of the 20th century – some African Americans were able to negotiate the white-dominated southern legal system to gain decisions in their favor. To win civil cases against whites in state and county courts, black litigants often had to align their cases with whites’ interests, so that it was in the interests of the legal system to rule for them, rather than for the opposing white litigant. At the very least, they had to make it appear that ruling for them would have a net zero effect on the larger system of white supremacy. But when African Americans’ cases directly confronted the interests of larger numbers of whites in a substantial way – even when they appealed to rights such as property, they were frequently unsuccessful.

In order to access government power through the courts, African Americans had to use and appeal to whites – white lawyers, white judges, white witnesses, and white jury members. Black litigants could not have litigated in southern courts without these whites. But working with whites had consequences. White lawyers limited the kinds of cases black southerners could litigate and shaped the arguments their cases could make. The important role of white witnesses in such trials also gave preference to suits in which whites agreed to testify. Moreover, black litigants’ dependence upon white juries and judges for favorable decisions at times led them to tailor their testimony and cases to their audiences, presenting themselves as more loyal or uneducated than they really were.

6) These suits were often intensely personal, involving long histories between the black and white litigants

In two-thirds of these cases during Reconstruction and about a third of cases in the two decades after Reconstruction, men and women who had been considered property now sued the very people who had owned them or their former owners’ heirs. They carried with them into court their long histories together during slavery.

African Americans negotiated within the white-dominated courts by recognizing the interests of the people wielding power in this realm, and framing their claims to appeal to such parties. Often, black litigants had been coached by their lawyers on what to say in their testimony. But black litigants also made decisions about what to say in their testimony based on their knowledge about race relations in their communities and, at times, their understanding of relevant law and the facts of the case. Their testimony and other choices during the course of litigation often played an important role in the success of their cases.

8) Not just the usual suspects participated in civil cases.

The final lesson I learned was that participants in the state courts went far beyond educated black men. Ordinary black men and women all played a part in the courts during the 85 years after the Civil War. During the three and a half decades after the Civil War, even the African Americans who gained a hearing of their case before a state’s highest court usually had very little formal education. Many had lived part of their lives as slaves or were the children of former slaves. In addition, in an era when white men dominated politics, almost half of these black litigants were women. Between 1865 and 1950, black women formed approximately 41 percent of African American litigants in civil cases between black and white litigants in the eight appellate courts examined.  The role of ordinary black men and women in these cases re-envisions the courts as not only a forum for test cases backed by organizations, but as a place where ordinary black and white southerners challenged each other and worked out their economic disputes against each other.

Please feel free to be in touch (contact details here) if you have any questions about my research. I will continue to release the transcripts and archival records of some key cases related to my research on my website in the coming months as well. Thank you again for the opportunity to blog here this month!

Posted by Melissa Milewski at 7:30 AM