From Goldwater to Zivotofsky: The Political Question Doctrine in the D.C. Circuit 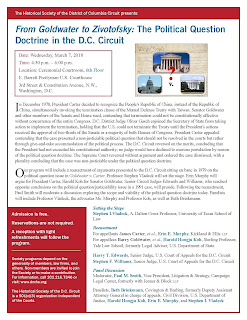 [We’ve previously noted this event but now have an updated announcement.]
The Historical Society of the District of Columbia Circuit presents:

From Goldwater to Zivotofsky: The Political Question Doctrine in the D.C. Circuit

In December 1978, President Carter decided to recognize the People’s Republic of China, instead of the Republic of China, simultaneously invoking the termination clause of the Mutual Defense Treaty with Taiwan. Senator Goldwater and other members of the Senate and House sued, contending that termination could not be constitutionally effective without concurrence of the entire Congress. D.C. District Judge Oliver Gasch enjoined the Secretary of State from taking action to implement the termination, holding that the U.S. could not terminate the Treaty until the President’s actions received the approval of two-thirds of the Senate or a majority of both Houses of Congress. President Carter appealed contending that the case presented a non-justiciable political question that should not be resolved in the courts but rather through give-and-take accommodation of the political process. The D.C. Circuit reversed on the merits, concluding that the President had not exceeded his constitutional authority; no judge would have declined to exercise jurisdiction by reason of the political question doctrine. The Supreme Court reversed without argument and ordered the case dismissed, with a plurality concluding that the case was non-justiciable under the political question doctrine.

Our program will include a reenactment of arguments presented to the D.C. Circuit sitting en banc in 1979 on the political question issue in Goldwater v. Carter. Professor Stephen Vladeck will set the stage. Erin Murphy will argue for President Carter, Harold Koh for Senator Goldwater. Senior Circuit Judges Edwards and Williams, who reached opposite conclusions on the political question/justiciability issue in a 1991 case, will preside. Following the reenactment, Paul Smith will moderate a discussion exploring the scope and viability of the political question doctrine today. Panelists will include Professor Vladeck, the advocates Ms. Murphy and Professor Koh, as well as Beth Brinkmann.

Admission is free.  Reservations are not required.  A reception with light refreshments will follow the program.  Society programs depend on the generosity of members, law firms, and others. Non-members are invited to join the Society or to make a contribution. For information, call 202.216.7346 or visit: [here].
Posted by Dan Ernst at 11:00 AM