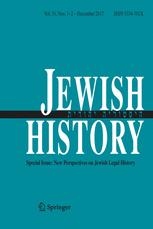 Word has reached us of a special issue of Jewish History (31:1-2; December 2017), entitled New Perspectives on Jewish Legal History;


Scholars regularly refer to independently operating Jewish courts as prime evidence of Jewish autonomy and self-rule in medieval Christian Europe. Yet few have focused on the largely anonymous individuals who populated these forums, despite the vital role that litigants played in fueling the judicial system. This article joins a growing body of research devoted to a bottom-up examination of the institutions of law and justice in premodern Europe, highlighting the activities of those who made use of the courts rather than the structures that authorized them. Specifically, it considers a divorce suit adjudicated in the mid-thirteenth century by the rabbinic court of Rabbi Hezkiah b. Jacob of Magdeburg as a lens onto the legal knowledge of lay litigants, their expectations of the judicial system, and the litigation strategies they developed. The reactions of R. Hezkiah and his colleagues to these tactics demonstrate that litigation in the Jewish courts not only reflected current legal trends but could also affect them.


Maimonides’s readers have long recognized that his presentation of the Oral Torah differed markedly from that of the Baghdadi geonim, particularly Sa‘adya Gaon. Maimonides did not cite any precedent for his disagreements with the geonim. Recent studies, however, have called attention to Andalusian sources that prefigure and parallel Maimonidean claims, suggesting that his views, at least in part, drew on earlier Andalusian thought. This article argues that a uniquely Andalusian understanding of the talmudic adage “A sage is superior to a prophet,” first found in the writings of Isaac Ibn Ghiyath, demonstrates that Andalusian Rabbanite culture had long approached the Oral Torah differently than did the geonim of Baghdad. After identifying a number of Andalusian antecedents for Maimonides’s approach to the Oral Torah, this article explores possible motives for the divergent pictures of revelation put forward by Rabbanites in Baghdad and Andalusia. It is suggested that the impact of Andalusian Maliki jurists helps explain the divergent positions of Baghdadi and Andalusian Rabbanites.


Jewish law has long faced the problem of individual litigants seeking multiple answers to a single halakhic question in order to select what they found to be the most favorable ruling. In this article, I examine the role that forum shopping for legal opinions played in the Jewish community of the medieval Islamic world. Individuals often made recourse to multiple juristic authorities, whether those authorities were leaders serving the geonic academies of Babylonia and the land of Israel or local jurists. I discuss some of the strategies the geonim and local jurists used to reduce competition between judicial rulings and how local judges utilized the various responsa composed on their behalf by these authorities or presented to them by litigants to bolster their case before the Jewish court. In so doing, I aim to refine our understanding of the social and legal role of rabbinic responsa in the medieval Islamic world by suggesting that this literature served as expert testimony to support one side or the other in a particular case rather than as the definitive record of the court’s ruling in that case.


Basing their conclusions on Latin documents, historians have painted the Jewish courts of medieval England as limited and haphazard affairs, their jurisdiction limited mostly to family law. They have also assumed that rabbinic courts ceased their activity in England after 1242. Hebrew rabbinic sources from the same period—some of which have never been published—provide more detailed information. These sources describe several professional courts staffed by learned scholars and adjudicating a range of legal issues. These courts existed throughout the thirteenth century—until the Expulsion of 1290—and included some of the leading rabbis in medieval England: Benjamin of Cambridge, Moses of London, and Moses’s son Elijah Menahem. The London court of Rabbi Elijah Menahem in particular possessed significant powers and utilized Elijah’s royal connections to enforce its rulings. Besides correcting the scholarly perception of rabbinic courts in medieval England, this article demonstrates how crucially important rabbinic texts and responsa are for historians as a source alongside other types of medieval documentation.


In recent years, historical scholarship has increasingly turned to the literature of the Tosafists and other medieval talmudists and halakhists in order to establish or support trends in religious observance among the laity. However, the extraction of accurate societal patterns from these rabbinic writings, which is a most welcome development, must take into account the often complex thought processes, methods, and proclivities of the authors, along with the precise textual histories and scope of the literature itself. This methodological study provides examples of the possible pitfalls that can emerge if interpretive strategies, textual provenance, and breadth of erudition are not fully considered.


Handbooks devoted to a single area of ritual practice figure prominently among the works produced by German Jews from the thirteenth century to the fifteenth. These handbooks include minhagim books intended primarily as liturgical guides for cantors and manuals for other types of communal functionaries, such as scribes and ritual slaughterers. Historians typically associate minhagim books with the post–Black Death period and the desire to provide guidance during a time of decline for German Jewry. Similarly, the flourishing of halakhic manuals is considered a fourteenth-century phenomenon, a result of the rabbinate’s professionalization. However, these explanations are insufficient since both genres emerged earlier. This article links the production of ritual handbooks to two trends: geographic mobility and a more text-oriented culture. Between the thirteenth century and the fifteenth, major changes in German Jewish settlement patterns disrupted the transmission of ritual practice and led to a need for practical guides. The proliferation of ritual handbooks was also related to the increase in Ashkenazic society—as in medieval Europe generally—in the production of written texts. These texts included liturgical genres and practical halakhic works, some of which served as sources for the handbooks. However, the handbooks tend to be more accessible than their predecessors and to include more practical details. The proliferation of late medieval ritual handbooks demonstrates that changes typically associated with the advent of print, including a growing reliance on written sources for practical information and a move toward the standardization of ritual practice, began to emerge in earlier centuries.


During the Middle Ages and into the early modern period, rabbinic scholars of law in Franco-German communities had an at best ambivalent attitude toward the codification of Jewish law. Even Rabbi Joseph Caro’s Shul?an `Arukh, first printed in Venice in 1565, was not well received by all. While students of the law from the lower ranks seem to have embraced the code, many leading rabbis—particularly those in sixteenth- and early seventeenth-century Poland—rejected it. In the course of the mid-seventeenth century, attitudes shifted, and Shul?an `Arukh became the place for commentaries and learned discussions of the law. By the eighteenth century, rabbinic courts were using Shul?an `Arukh as the basis of their legal decision making. This is confirmed, at least for Frankfurt am Main, through an examination of the legal diary of Rabbi Nathan Maas (d. 1794). In his diary, Maas not only summarized cases that he heard but also sometimes offered rationales for the court’s decisions. These précis make constant reference to Shul?an `Arukh and its commentaries while never entering into an analysis of talmudic sources. This cannot have been because of a lack of ability, for Maas and his colleagues on the Frankfurt court were well-known scholars who published talmudic commentaries of substance. The use of a code, even by such authorities, may have been for utilitarian reasons, that is, to speed up the judicial process.


The respective roles of jurists and judges in the decision-making process offers a valuable perspective on judicial practice and the delivery of justice in early modern Ashkenazic communities. This essay is concerned with differences in the approaches of poseqim (jurists) and dayanim (judges); it suggests that these distinctions were reflections of the institutional settings in which they worked, the size of their communities, and regional factors. Data unearthed from communal records and rabbinic responsa offer important evidence of disparities between the offices of early modern dayanim and poseqim, their distinct personae, and their respective views of how judicial rulings are decided. Moreover, these differences were related to the slow transition to fixed rabbinic-communal courts in western and central Europe that was a product of forces peculiar to the resettlement of Jews in the west, the deliberate development of communal traditions, and the role of the enlightened absolutist state. The impact of the growing recourse to non-Jewish courts, especially as it evinced differences between eastern and western/central European history and culture, was also a factor. Clearly, regional forces influenced the distinct legal efforts and perspectives of judges and jurists, as did the discrete functions they were assigned, their particular training, and the institutional standing of rabbinic courts. These differences became more glaring in the two centuries prior to the collapse of the ancien régime, as structural changes in western Ashkenazic communities contributed to a new Jewish legal culture.