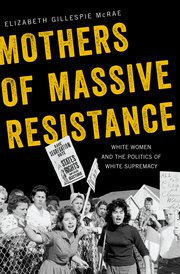 Why do white supremacist politics in America remain so powerful? Elizabeth Gillespie McRae argues that the answer lies with white women.

Examining racial segregation from 1920s to the 1970s, Mothers of Massive Resistance explores the grassroots workers who maintained the system of racial segregation and Jim Crow. For decades in rural communities, in university towns, and in New South cities, white women performed myriad duties that upheld white over black: censoring textbooks, denying marriage certificates, deciding on the racial identity of their neighbors, celebrating school choice, canvassing communities for votes, and lobbying elected officials. They instilled beliefs in racial hierarchies in their children, built national networks, and experimented with a color-blind political discourse. Without these mundane, everyday acts, white supremacist politics could not have shaped local, regional, and national politics the way it did or lasted as long as it has.

With white women at the center of the story, the rise of postwar conservatism looks very different than the male-dominated narratives of the resistance to Civil Rights. Women like Nell Battle Lewis, Florence Sillers Ogden, Mary Dawson Cain, and Cornelia Dabney Tucker publicized threats to their Jim Crow world through political organizing, private correspondence, and journalism. Their efforts began before World War II and the Brown decision and persisted past the 1964 Civil Rights Act and anti-busing protests. White women's segregationist politics stretched across the nation, overlapping with and shaping the rise of the New Right. Mothers of Massive Resistance reveals the diverse ways white women sustained white supremacist politics and thought well beyond the federal legislation that overturned legal segregation.

“A strikingly original and unsettling analysis of the ‘long segregation movement.’ Tracking this struggle to maintain racial difference and distance from the eugenics mania of the 1920s through the watershed of the 1940s to the Boston busing crisis and the rise of the New Right, Elizabeth McRae paints a vivid portrait of hard-working white women in local communities across the country who, drawing on their moral authority as mothers, fought to protect white privilege, sometimes explicitly, through the tactics of massive resistance, sometimes covertly, under the guise of school choice and limited government. A must read for understanding the politics of white supremacy over the past half century and in our own time.”--Jacquelyn Dowd Hall, University of North Carolina at Chapel Hill

“Women have long been marginalized in studies of segregation, but Mothers of Massive Resistance makes a powerful case for placing them at the center of our attention. In this smartly argued book, Elizabeth McRae shows that southern white women not only brought massive resistance into being, but then sustained its growth at the grassroots in vitally important ways.”--Kevin Kruse, Princeton University

“A product of extraordinary research, McRae’s gracefully written account captures the critical role white women of the South played in defending segregation even as it exposes the deep-seated cultural assumptions that led them to battle.”--Dan Carter, University of South Carolina
Posted by Dan Ernst at 12:30 AM