Christopher W. Schmidt, Chicago-Kent Law, has published The Sit-Ins: Protest and Legal Change in the Civil Rights Era, with the University of Chicago Press: 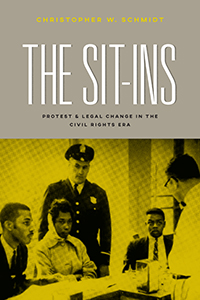 On February 1, 1960, four African American college students entered the Woolworth department store in Greensboro, North Carolina, and sat down at the lunch counter. This lunch counter, like most in the American South, refused to serve black customers. The four students remained in their seats until the store closed. In the following days, they returned, joined by growing numbers of fellow students. These “sit-in” demonstrations soon spread to other southern cities, drawing in thousands of students and coalescing into a protest movement that would transform the struggle for racial equality.

The Sit-Ins tells the story of the student lunch counter protests and the national debate they sparked over the meaning of the constitutional right of all Americans to equal protection of the law. Christopher W. Schmidt describes how behind the now-iconic scenes of African American college students sitting in quiet defiance at “whites only” lunch counters lies a series of underappreciated legal dilemmas—about the meaning of the Constitution, the capacity of legal institutions to remedy different forms of injustice, and the relationship between legal reform and social change. The students’ actions initiated a national conversation over whether the Constitution’s equal protection clause extended to the activities of private businesses that served the general public. The courts, the traditional focal point for accounts of constitutional disputes, played an important but ultimately secondary role in this story. The great victory of the sit-in movement came not in the Supreme Court, but in Congress, with the passage of the Civil Rights Act of 1964, landmark legislation that recognized the right African American students had claimed for themselves four years earlier. The Sit-Ins invites a broader understanding of how Americans contest and construct the meaning of their Constitution.


Michael Klarman, Harvard Law School, author of From Jim Crow to Civil Rights: The Supreme Court and the Struggle for Racial Equality

“Schmidt, one of our most talented young legal historians, has written an engaging and fast-paced narrative of one of the civil rights movement’s epic events: the sit-in demonstrations. Thoroughly researched and convincingly argued, Schmidt’s book is a model of the ‘new’ legal history: He demonstrates how ordinary Americans shape the development of constitutional law and how the sundry interactions of diverse institutions influence constitutional change in unpredictable ways. The sit-in movement finally has the legal history it deserves.”

“Schmidt has written the definitive legal treatment of the sit-in movement of the 1960s. He masterfully weaves together the social, political, and legal history of the transformative protests of the brave African American college students who challenged Jim Crow. Schmidt is unafraid to look at the messiness of the law—the confusions, gaps, and inconsistencies that most scholars try to neaten up. There is conflict here, and that conflict is deeply illuminating. The Sit-Ins tells a fascinating story that adds much to our understanding of the relationship between law and social movements, the role of popular constitutionalism outside the courts, and the meaning of the Constitution itself.”