Winkler's "We the Corporations" 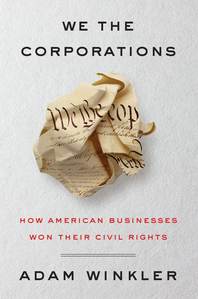 In this groundbreaking portrait of corporate seizure of political power, We the Corporations reveals how American businesses won equal rights and transformed the Constitution to serve the ends of capital. Corporations—like minorities and women—have had a civil rights movement of their own, and now possess nearly all the same rights as ordinary people. Uncovering the deep historical roots of Citizens United, Adam Winkler shows how that controversial 2010 Supreme Court decision was the capstone of a two-hundred-year battle over corporate personhood and constitutional protections for business. Bringing to resounding life the legendary lawyers and justices involved in the corporate rights movement—among them Daniel Webster, Roger Taney, Lewis Powell, and even Thurgood Marshall—Winkler’s tour de force exposes how the nation’s most powerful corporations gained our most fundamental rights and turned the Constitution into a bulwark against the regulation of big business.

“An eye-opening account of how corporations became ‘persons’ entitled to constitutional rights and used those rights to impede efforts to regulate them in the interests of real people.” — David Cole, author of Engines of Liberty: The Power of Citizen Activists to Make Constitutional Law

“An incisive account of the unlikely rise of an idea that has nearly turned American politics upside down.” — Jill Lepore, author of The Secret History of Wonder Woman

“This is a brilliant, beautifully written book on a topic affecting almost every area of law: how did corporations come to have rights under the Constitution? Professor Winkler carefully details this history from English law to the present, and the book is filled with new insights and information. Any future discussion of rights for corporations will be shaped by this wonderful book.” — Erwin Chemerinsky, dean and Raymond Pryke Professor of First Amendment Law, University of California, Irvine School of Law
Posted by Dan Ernst at 1:00 PM