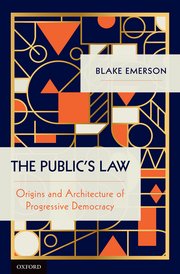 The Public's Law is a theory and history of democracy in the American administrative state. The book describes how American Progressive thinkers - such as John Dewey, W.E.B. Du Bois, and Woodrow Wilson - developed a democratic understanding of the state from their study of Hegelian political thought.

G.W.F. Hegel understood the state as an institution that regulated society in the interest of freedom. This normative account of the state distinguished his view from later German theorists, such as Max Weber, who adopted a technocratic conception of bureaucracy, and others, such as Carl Schmitt, who prioritized the will of the chief executive. The Progressives embraced Hegel's view of the connection between bureaucracy and freedom, but sought to democratize his concept of the state. They agreed that welfare services, economic regulation, and official discretion were needed to guarantee conditions for self-determination. But they stressed that the people should participate deeply in administrative policymaking. This Progressive ideal influenced administrative programs during the New Deal. It also sheds light on interventions in the War on Poverty and the Second Reconstruction, as well as on the Administrative Procedure Act of 1946.

The book develops a normative theory of the state on the basis of this intellectual and institutional history, with implications for deliberative democratic theory, constitutional theory, and administrative law. On this view, the administrative state should provide regulation and social services through deliberative procedures, rather than hinge its legitimacy on presidential authority or economistic reasoning.