Back in 2017, Alice Rio (King's College London) published Slavery After Rome, 500-1100 with Oxford University Press. From the publisher: 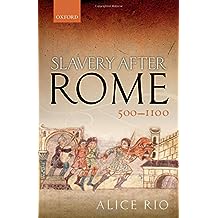 Slavery After Rome, 500-1100 offers a substantially new interpretation of what happened to slavery in Western Europe in the centuries that followed the fall of the Roman Empire. The periods at either end of the early middle ages are associated with iconic forms of unfreedom: Roman slavery at one end; at the other, the serfdom of the twelfth century and beyond, together with, in Southern Europe, a revitalized urban chattel slavery dealing chiefly in non-Christians. How and why this major change took place in the intervening period has been a long-standing puzzle. This study picks up the various threads linking this transformation across the centuries, and situates them within the full context of what slavery and unfreedom were being used for in the early middle ages.

This volume adopts a broad comparative perspective, covering different regions of Western Europe over six centuries, to try to answer the following questions: who might become enslaved and why? What did this mean for them, and for their lords? What made people opt for certain ways of exploiting unfree labor over others in different times and places, and is it possible, underneath all this diversity, to identify some coherent trajectories of historical change?

"Rio has done a splendid job of analysing an extremely intractable source base and providing an interpretation that, without in any way trying to smooth over the inconsistencies and messiness of the evidence, nevertheless makes sense. Her book forces us to rethink narratives regarding the importance of the slave trade for the early European economy....She has done a tremendous service by giving us a new basis for discussion of one of those elements of social transformation. This study will be an indispensable addition to any and every library (and course bibliography) that includes early medieval history in its remit."-Shami Ghosh

"This excellent work provides a new lens for understanding the many varieties of early medieval unfreedom, and readers should welcome the clarity Rio has brought to this topic....Highly recommended."-Choice