Bird's "Revolution in Freedoms of Press and Speech"

Wendell Bird has published The Revolution in Freedoms of Press and Speech: From Blackstone to the First Amendment and Fox's Libel Act (Oxford University Press): 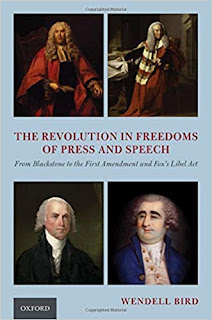 This book discusses the revolutionary broadening of concepts of freedom of press and freedom of speech in Great Britain and in America in the late eighteenth century, in the period that produced state declarations of rights and then the First Amendment and Fox's Libel Act.

The conventional view of the history of freedoms of press and speech is that the common law since antiquity defined those freedoms narrowly, and that Sir William Blackstone in 1769, and Lord Chief Justice Mansfield in 1770, faithfully summarized the common law in giving a very narrow definition of those freedoms as mere liberty from prior restraint and not liberty from punishment after something was printed or spoken.

This book proposes, to the contrary, that Blackstone carefully selected the narrowest definition that had been suggested in popular essays in the prior seventy years, in order to oppose the growing claims for much broader protections of press and speech. Blackstone misdescribed his summary as an accepted common law definition, which in fact did not exist. A year later, Mansfield inserted a similar definition into the common law for the first time, also misdescribing it as a long-accepted definition, and soon misdescribed the unique rules for prosecuting sedition as having an equally ancient pedigree. Blackstone and Mansfield were not declaring the law as it had long been, but were leading a counter-revolution about the breadth of freedoms of press and speech, and cloaking it as a summary of a narrow common law doctrine that in fact was nonexistent.

That conflict of revolutionary view and counter-revolutionary view continues today. For over a century, a neo-Blackstonian view has been dominant, or at least very influential, among historians. Contrary to those narrow claims, this book concludes that the broad understanding of freedoms of press and speech was the dominant context of the First Amendment and of Fox's Libel Act, and that it enjoyed greater historical support.