Putting the People into Legal History 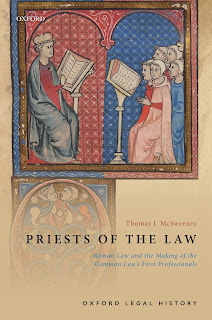 One of the central questions in the history of the early common law concerns the early common law’s relationship to civil law. Roman and canon law, the ancestors of modern civil-law systems, were experiencing a revival across Europe around the same time the central royal courts in England were establishing the institutions and procedures that we now think of as hallmarks of the common law. English exceptionalism is a well-worn trope, and there’s a tenacious narrative that presents the common law as a wholly insular and uniquely English institution. There’s often a heavy dose of superiority in this narrative, as well. Tamar Herzog recently pointed out on this blog that continental law is often used as a straw man against which to compare the common law. To counteract this narrative of English superiority scholars have looked for signs of civilian influence on the early common law.

One issue I’ve encountered with the literature on this issue, however, is that it often speaks as if the legal systems are the actors, as if an essentialized civil law or ius commune is exerting some kind of influence on an essentialized common law. But if we find civilian influences in the early common law, it is presumably because there were people who put them there. When I wrote Priests of the Law, I wanted the people, and how they navigated the bodies of norms, networks, ideas, and institutions that we call the common law and the civil law, to be at the center of the story.

One of the problems of writing about individuals in the middle ages is the spottiness of the evidence. William of Raleigh, who was probably the person who wrote most of the Bracton treatise, was a major figure in the courts of the thirteenth century. He was chief justice of the court that in later centuries would be called the King’s Bench, he seems to have been King Henry III’s chief administrator and adviser for a time in the 1230s, and he died bishop of Winchester, one of the wealthiest and most important episcopal sees in England. We do not know who his parents were or when he was born. We can only guess at how old he was when he was writing Bracton and advising the king. A series of letters from Robert Grossteste, an important cleric, to William of Raleigh survive, but we are left to reconstruct Raleigh’s side of the conversation from what Grosseteste says. The justices of the king’s courts only really enter this historical record when they have reason to, usually when they’re encountering the administrative institutions of either the Church or the Crown, which kept written records. Raleigh first entered the historical record when he received an ecclesiastical living as rector of a parish church, for instance.

So how do we fill these gaps in our knowledge? This is where Bracton comes in. As I noted in my previous post, Bracton was written by a succession of justices working in the king's courts in the thirteenth century. Bracton has generally been mined for what it can tell us about the law, but it is just as interesting for what it can tell us about the justices who wrote it. It tells us quite a bit about how they perceived themselves and their work. The authors of the treatise were familiar with a range of texts of Roman and canon law. In Bracton, they wove Roman and canon law together with the work of the royal courts, and they did it in interesting ways. The authors of the treatise sometimes use Roman law to fill gaps in the common law or to push for reform of a rule to be more in line with that of Roman law. The most interesting, and I think most common, use of Roman law we find in the treatise is to try to prove that the rules and procedures of the common law are already perfectly in line with the rules of Roman law. The authors go to great lengths to try to demonstrate that the English writs for land could be explained in terms of Roman possessio and proprietas, creating a number of inconsistent schemes for reconciling the one with the other. I argue in the book that the justices’ use of Roman law was mostly about how they wanted to perceive themselves and their work. These justices did not think that the law applied in the English royal courts was superior to the Roman civil law and they would not have approved of the notion that English common law was exceptional. These justices worked hard to demonstrate that their work could be understood through the lens of Roman law and that the common law was just one part of a broader civil-law culture.

-Tom McSweeney
Posted by Thomas J. McSweeney at 9:30 AM