We received word the other day of another addition to the shelf of book-length case studies on environmental law (ours includes Duncan Maysille’s Ducktown Smoke and William Buzbee’s Fighting Westway).  It is Stringfellow Acid Pits: The Toxic and Legal Legacy (University of Michigan Press, 2020) by Brian Craig, a lawyer in Logan, Utah and a full-time adjunct faculty member in the School of Legal Studies at Purdue University Global. 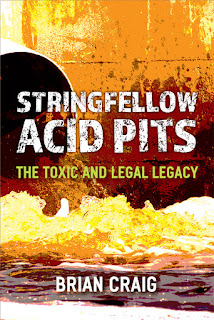 Stringfellow Acid Pits tells the story of one of the most toxic places in the United States, and of an epic legal battle waged to clean up the site and hold those responsible accountable. In 1955, California officials approached rock quarry owner James Stringfellow about using his land in Riverside County, east of Los Angeles, as a hazardous dump site. Officials claimed it was a natural waste disposal site because of the impermeable rocks that underlay the surface. They were gravely mistaken. Over 33 million gallons of industrial chemicals from more than a dozen of the nation’s most prominent companies poured into the site’s unlined ponds. In the 1960s and 1970s, heavy rains forced surges of chemical-laden water into Pyrite Creek and the nearby town of Glen Avon. Children played in the froth, making fake beards with the chemical foam. The liquid waste contaminated the groundwater, threatening the drinking water for hundreds of thousands of California residents. Penny Newman, a special education teacher and mother, led a grassroots army of so-called “hysterical housewives” who demanded answers and fought to clean up the toxic dump.

The ensuing three-decade legal saga involved more than 1,000 lawyers, 4,000 plaintiffs, and nearly 200 defendants, and led to the longest civil trial in California history. The author unveils the environmental and legal history surrounding the Stringfellow Acid Pits through meticulous research based on personal interviews, court records, EPA documents, and other documents. The contamination at the Stringfellow site will linger for hundreds of years. The legal fight has had an equally indelible influence, shaping environmental law, toxic torts, appellate procedure, takings law, and insurance coverage, into the present day.