We are delighted to announce a new guest blogger for the month of March.  Thomas J. McSweeney is Professor of Law at the Marshall-Wythe School of Law at William & Mary, where he has taught since 2013.  His courses include histories of the early Common Law, the relationship between Common Law and Civil Law, and the legal profession, as well as Property and Trusts and Estates.  He holds a J.D. and Ph.D. from Cornell University, where he studied with the medievalist Paul Hyams.  He has been a fellow in the ASLH's Hurst Summer Institute in Legal History.  Last semester he was a Visiting Fellow at Clare Hall at the University of Cambridge.

In 2015, in the company of other stalwart medievalists, he strove valiantly to prevent the 800th anniversary of Magna Carta from descending into ahistorical folderol. He has also published many articles and book chapters on other topics in medieval legal history.  Just out from Oxford University Press is Priests of the Law: Roman Law and the Making of the Common Law’s First Professionals: 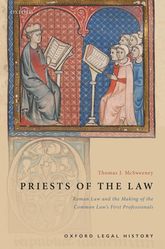 Priests of the Law tells the story of the first people in the history of the common law to think of themselves as legal professionals: the group of justices who wrote the celebrated treatise known as Bracton. It offers a new interpretation of Bracton and its authors. Bracton was not so much an attempt to explain or reform the early common law as it was an attempt to establish the status and authority of the king’s justices. The justices who wrote it were some of the first people to work full-time in England’s royal courts, at a time when they had no obvious model for the legal professional. They found one in an unexpected place: the Roman-law tradition that was sweeping across Europe in the thirteenth century. They modeled themselves on the jurists of Roman law who were teaching in Italy and France. In Bracton and other texts they produced, the justices of the royal courts worked hard to establish that the nascent common-law tradition was just one constituent part of the Roman-law tradition. Through their writing, this small group of people, working in the courts of an island realm, imagined themselves to be part of a broader European legal culture. They made the case that they were not merely servants of the king. They were priests of the law.