We’ve recently learned of the publication of A. J. Duggan, Popes, Bishops, and the Progress of Canon Law, c.1120–1234, ed. T.R. Baker (Brepols, 2020).   Anne J. Duggan is Emeritus Professor of Medieval History and Fellow of King’s College London; Travis R. Baker (D.Phil, Oxford, 2017) is a private scholar living in the Diocese of Orange: 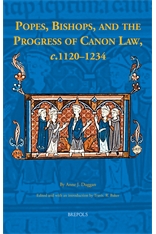 This book considers the role of popes and bishops in the development of the law of the Church between 1120 and 1234. Although historians have traditionally seen the popes as the driving force behind the legal transformation of the Church in the twelfth and thirteenth centuries, the primary argument of this book is that the functioning of the process of consultation and appeal reveals a different picture: not of a relentless papal machine but of a constant dialogue between diocesan bishops and the papal Curia.

Bishops have always played a central role in the making and enforcement of the law of the Church, and none more so than the bishop of Rome. From convening and presiding over church councils to applying canon law in church courts, popes and bishops have exercised a decisive influence on the history of that law.

This book, a selection of Anne J. Duggan’s most significant studies on the history of canon law, highlights the interactive role of popes and bishops, and other prelates, in the development of ecclesiastical law and practice between 1120 and 1234. This emphasis directly challenges the pervasive influence of the concept of ‘papal monarchy’, in which popes, and not diocesan bishops and their legal advisers, have been seen as the driving force behind the legal transformation of the Latin Church in the twelfth and early thirteenth centuries. Contrary to the argument that the emergence of the papacy as the primary judicial and legislative authority in the Latin Church was the result of a deliberate programme of papal aggrandizement, the principal argument of this book is that the processes of consultation and appeal reveal a different picture: not of a relentless papal machine but of a constant dialogue between diocesan bishops and the papal Curia, in which the ‘papal machine’ evolved to meet the demand.

–Dan Ernst.  TOC after the jump.
Chapter 1: Jura sua unicuique tribuat: Innocent II and the advance of the learned laws
Chapter 2: ‘Justinian’s Laws, not the Lord’s’: Eugenius III and the learned laws
Chapter 3: Servus servorum Dei: Adrian IV’s contribution to canon law (1154-9)
Chapter 4: Alexander ille meus: The Papacy of Alexander III
Chapter 5: The Effect of Alexander III’s ‘Rules on the Formation of Marriage’ in Angevin England
Chapter 6: The Nature of Alexander III’s Contribution to Marriage Law, with special reference to Licet preter solitum
Chapter 7: Master of the Decretals: A Reassessment of Alexander III’s Contribution to Canon Law
Chapter 8: Making Law or Not? The Function of Papal Decretals in the Twelfth Century
Chapter 9: ‘Our Letters have not usually made law (legem facere) on such matters’ (Alexander III, 1169): a new look at the formation of the canon law of marriage in the twelfth century
Chapter 10: Manu Sollicitudinis: Celestine III and Canon Law
Chapter 11: De Consultationibus: the role of episcopal consultation in the shaping of canon law in the twelfth century
Chapter 12: The English Exile of Archbishop Øystein of Nidaros (1180-83)